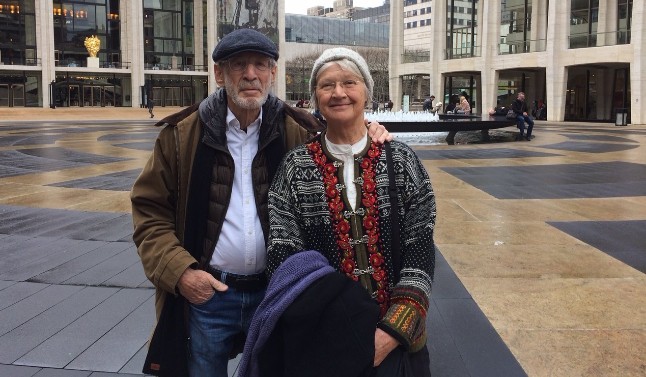 Soumu's birthday present is still waiting for him in Copenhagen. Photo: Caroline Ørsum
Romance interrupted
It was only on Sunday night that Caroline Ørsum, a children's writer based in Copenhagen, worked out that her Indian boyfriend Soumu, as a resident of Finland, would be eligible to come to Denmark under the new rules agreed last week.
“It was a huge relief actually,” she said about the uncertainty. “It’s been really stressful —  especially the part about not knowing anything, not having any idea and so your imagination is free to run wild.”
The guidelines, published in full on Sunday, say that residents as well as citizens of the Nordic countries and Germany can now cross the border to visit their boyfriends or girlfriends.
“As long as he has a domicile in Finland, he’s OK,” Ørsum explains. “It’s about where you live, it’s not about citizenship. So he’s hopefully going to come here in two weeks.”
The couple's long-distance romance had been flourishing for a year when borders closed on March 15, with Suomu flying to Copenhagen every three weeks, and the couple also meeting in Helsinki. “We've also spent Christmas and New Year together, and we’ve also been able to go on small workations together since we’re both self-employed.”
They have each celebrated their birthdays over the period.
“We made the same cake in two countries, so we’ve been watching ourselves on Skype eating the same cake. We’ve been trying to make it as close as possible, but it’s not quite the same on Skype as in real life.”
Ørsum has been so frustrated by the border closure that on May 8, she started a Facebook group Kærester adskilt af grænselukningen under coronavirus (Lovers separated by coronavirus border closures).
“I felt so alone and frustrated about the situation and I had a hard time finding information about this, so I was looking for somewhere where I could exchange information with other people in the same situation.”
She said that she supported Denmark's lockdown in March.
“I understand that choice fully, because we didn’t know the situation, but I’ve been a little bit surprised about how stubborn they have been in sticking to this decision and arguing that keeping the borders shut will save Denmark.
“I think all Europeans now know how to behave with this virus, I don’t think the Swedes are behaving in a more dangerous way than Danes are.” Bente Strand (77) and her American sweetheart Matthew Gruskin (78). Photo: Private
Split over millennia
Bente Strand (77) met her American sweetheart Matthew Gruskin (78) while backpacking in Greece back in 1965. The couple hitchhiked around the Middle East, before travelling on a Vespa from Athens to Amsterdam. She then came and lived with him for a year in New York while he finished his law degree.
After Gruskin's second wife died seven years ago, he got back in touch and the couple have been conducting a passionate late-life romance ever since.
As Gruskin is American, last week's relaxation is no good for for the couple.
Of the 291 members of Ørsum's group, 25 of those who answered a Facebook survey have a lover in the UK, 17 in the US, 15 in Germany, and 8 in The Netherlands.
“Those of us with sweethearts of other nationalities find it very unfair,” Strand complains. “Why not our sweethearts? We are very happy that others are able to see their lovers again, but we can’t, and we don’t know when we can be together again.”
“It’s not that we are that many. It won't be the biggest invasion in the history of Denmark, and that’s why I would like the story to be known.”
The two have spend more than half of their time together over the past seven years, with Gruskin spending three month periods in Denmark, Gruskin joining him in Manhattan, and the couple travelling widely both in Europe and in the US.
“We've both retired. He was a lawyer and I’m a librarian so we have time, and our finances are fine, so we can travel. You know, people may think we could just sit still in our walking chairs, but we don’t feel like it!” Strand jokes.
The couple had been planning on meeting in Ireland in May, and then flying to Denmark in June before going to see the Faroe Islands.
“We are not young any longer which is why we don’t want to waste any time.” Bente Strand and Matthew Gruskin when they met in the 1960s. Photo: Private
Dating rudely interrupted
Maesy, a 42-year-old Australian living in Malmö, had only had four dates with her Danish lover when border restrictions were imposed, forcing the couple into a sort of long-distance relationship at an uncomfortably early stage.
“It's been nice getting to know each other remotely, I guess, and he is a really nice guy and so I think it's certainly worth riding it out to see if we want to pursue something,” she says of the enforced two-month wait. “It's an awkward situation to be in when you're not really certain if the person is worth the wait.”
The weekend before last, the Dane — who wants to remain anonymous — visited her in Malmö. Then, last week, Denmark's government announced a political deal to allow Nordic residents to visit their lovers.
This Friday, she plans to cross the border for the first time since March 11.
“This morning I rung up the police and asked what kind of proof I needed to cross the border, and they said text messages, photos and those sorts of things were enough, so we're going to test it out this Friday,” she said. “It's obviously really exciting.” Adrian Carlsen and Melinda Schneider at Copenhagen's Tivoli amusement park before their separation. Photo: Private
Love does not understand boundaries
Melinda Schneider met her Danish boyfriend Adrian Carlsen in February 2018, when he came to her hometown, Bradford in Ontario, Canada, to play for the local Bradford Bulls ice hockey team.
Until coronavirus struck, the two had been seeing each other every two to three months, with Melinda travelling to Denmark, where Adrian is now playing for the Hvidovre Fighters.
But when Adrian returned to Denmark from a holiday with Melinda's family in the Dominican Republic, it was the last time they could see each other.
“It has been gruelling, tiresome, and at the best of times, expensive to see each other, but the reality is that one cannot put a price tag on love,” Schneider says.  “To be separated due to these closed borders has been increasingly difficult, especially not knowing that there is any hope of us being united again in the near future.”
The cruellest moment came when Danish Prime MInister Mette Frederiksen announced that the border would be reopening for split couples, but failed to mention until the next day that this only included those resident in Germany and the Nordic countries.
“We genuinely don’t understand what my nationality has to do with my likelihood of infection,” she said. “Since Ontario is the last province in Canada to do any opening, I have been home and isolating since I was laid off from my jobs and university converted to online instruction on March 15th.”
“There does not seem to be any science backing this decision, and rather, political agendas making the decisions here.”