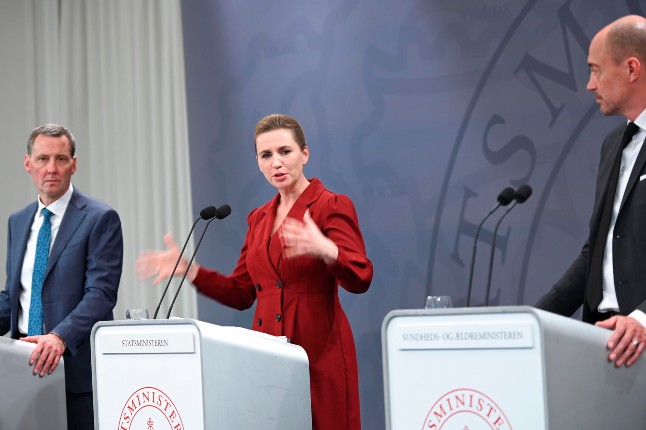 Denmark's Prime Minister Mette Frederiksen unveiling the new strategy on Tuesday. Photo: Philip Davali/Ritzau Scanpix
At a press conference on Tuesday morning Mette Frederiksen, the country's prime minister, said that health authorities hoped to be able to identify infected people and quarantine them and those they had been in contact with quickly enough to prevent new outbreaks from spreading.
“Once a person has been tested and found to be infected, the authorities will this week start to track who they have been with, so they can be isolated quickly and we can break the chain of infection,” she said.
The government will set up a new phone hotline to help those who have been diagnosed as having the virus list all the people they have been in contact with, which will primarily include those they live with, family members, friends, and work colleagues.
These close contacts will then be tested on the 4th and 6th day after they were in contact with the infected person.
The government has asked municipalities to hire rooms in hotels, hostels and holiday villages, and offer them to those asked to go into quarantine, so that those that they live with can continue to move freely in society.
Søren Brostrøm, director of the Danish Health Authority, said that his agency's focus would now be on tracking and testing all those who infected people have been in contact with.
“We will then use this to support intensive isolation of all those who present a risk of infection and in this way we are quite optimistic that we will be can break the chain of infection in the coming phases of reopening,” he said, according to the Politiken newspaper.
He said the new testing strategy was “a major paradigm shift” which would reduce the number of people who need to spend time in quarantine.
“We will put in place a much more focused test effort to avoid having to quarantine people unnecessarily,” he said.
Magnus Heunicke, the country's health minister said that if people refused to go into quarantine voluntarily, the could be compelled to do so.
“Psychiatric patients and abusers have been forcibly isolated after refusing to follow the guidelines,” he said. “But that is really the exception. There is a great sense of social responsibility among citizens
“But we cannot deny that there will be some cases where the authorities will compel people who do not follow the guidelines and risk starting chains of contamination.”
Currently Denmark's regional government can carry out up to 10,000 tests per day. But according to the government this needs to be expanded, an expansion which will be led by the new TestCenter Danmark agency, which also has the capacity to carry out 10,000 tests a day.