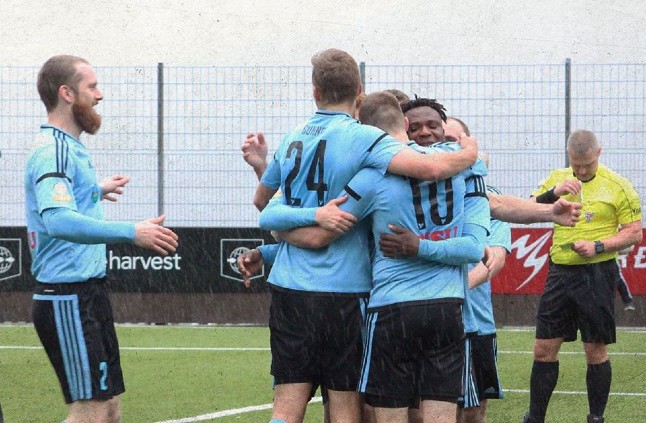 The team played without spectators. Photo: Vikingur
Originally scheduled to start two months ago, the Faroese top flight belatedly kicked off its 2020 season this weekend after being delayed due to the coronavirus pandemic.
In the last of Saturday's five games, three-time national champions Vikingur were held to a goalless draw by AB.
Vikingur captain Atli Gregersen, who has made 59 appearance for the Faroes' national team, told AFP that he hopes supporters can return to the grounds as soon as possible.
“We play for the fans, so it's very hard to play a game without spectators,” the 37-year-old said. “But with a little luck, it will soon be over and we can have our fans back again.”
Under normal circumstances, around 10 percent of the 52,000 inhabitants of the islands, situated between Iceland and Scotland, can congregate in the region's largest stadium.
But despite not being allowed inside the grounds, several fans gathered outside to be close to the action.
“I really, really missed it. I play football myself, I played it every day, but since the virus, there is nothing left,” AB supporter Sverri Petersen said.
Faroese domestic football, semi-professional and affiliated to FIFA since 1988, has never garnered so much attention.
Norwegian television has even bought the rights to show the first 12 rounds of matches, which has given the clubs a significant financial windfall.
“This is a great opportunity… Some players dream of playing full-time internationally. Now, all eyes are on them,” said Trondur Arge, a sports journalist at Sosialurin, the largest Faroese newspaper.
The only European league to carry on playing since the COVID-19 outbreak hit Europe has been Belarus, although the German Bundesliga is planning on resuming next weekend.
The Faroes has recorded 187 cases of the coronavirus, but no deaths.
The territory closed its borders in March and, like much of Europe, imposed strict lockdown measures which it started to lift on April 20