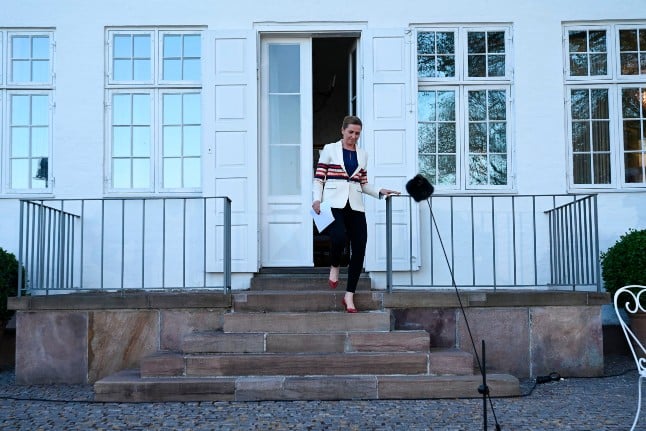 Danish Prime Minister Mette Frederiksen steps out to announce the agreement to the waiting press on Thursday. Photo: Philip Davali/Ritzau Scanpix
“We have continued to take our starting point as the demand that it must be safe from a health point of view,” Denmark's prime minister Mette Frederiksen said as she announced the agreement. “But we are opening up so that it benefits the Danish economy, Danish businesses and therefore also Danish employees.
“And then we have also chosen to take in consideration some actions that are not directly related to the economy, but which have to do with how we can live our lives in this time.”
The parties have decided to keep in place a ban on gatherings involving more than ten people, even though the country's infectious diseases agency, SSI, said in advice given to the parties that there was “a potential opportunity” to raise the limit to 50.
At the press conference Frederiksen stressed that the timetable was still dependent on residents sticking to social distancing and hygiene guidelines.
“The situation is still serious, and even though we are smiling today, I have to emphasize that it is a virus we are dealing with and we cannot negotiate with it,” she said.
“We must keep our distance and follow the authorities' guidelines. If we do that, we will move towards a gradual and greater opening of Danish society. “You have to be solidarity with those who must not be infected by the disease, who risk dying if they get it.”
Here is the timetable for the second phase of Denmark's reopening:
From May 7:
From May 11: