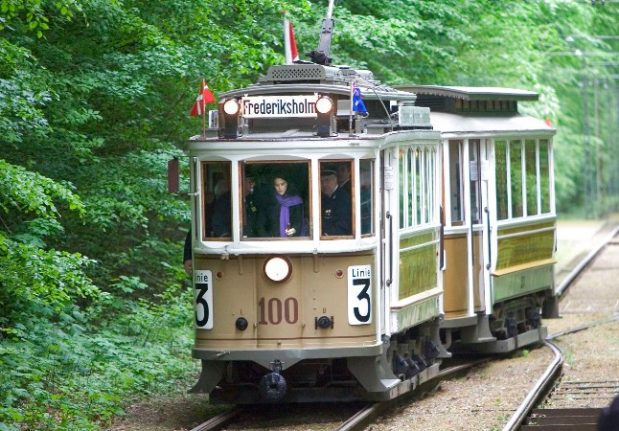 An old tram from Melbourne Australia plowing the tracks in Jystrup, Denmark, with Crown Princess Mary at the helm. Photo: Keld Navntoft/Ritzau Scanpix
According to Ezio Di Nucci, Professor of Bioethics at Copenhagen University, and Jakob Green Werkmäster, a lecturer at Lund University, the issue of lockdowns and the lifting of them throws us immediately into the so-called “trolley problem”, a thought experiment popular in the study of modern-day practical ethics.
In its most basic version, a runaway trolley is careering down the tracks, barrelling towards five people tied down with rope 50m away. You can pull a lever and switch the trolley onto a separate track, and thereby save the five people. But unfortunately, you can see a man standing there, who will be mowed down and killed if the trolley unexpectedly shifts direction.
If you pull the lever, are you responsible for killing the man? And if you don't, are you responsible for killing the five others by omission?
What should you do?
“In the context of the trolley-problem, one could say that Sweden are the ones not pulling the lever by omitting doing some things (harsher restrictions),” Werkmäster told The Local, although he warned this was only a “matter of degree” as Sweden has taken some actions.
“The case of Denmark might be a more straightforward application,” he continued. “They have had harsh restrictions, and if they were to lift the restrictions they are actively doing something that has some expected consequences. This can be seen as 'pulling the lever'.”
Even if Sweden's less restrictive strategy ends up saving more lives in the long term, can the country's authorities be held responsible for any deaths they could have saved by imposing a tougher lockdown?
Similarly in Denmark, if it decides to open restaurants and cafés and the death rate increases in coming months above that which would have happened if they had remained closed, has the government caused those additional deaths?
Werkmäster argued both countries could be held 'responsible' for deaths, but he said this did not mean either government should necessarily be held 'guilty'.
“'Guilty' in ordinary language use seems to me to carry with it negative connotations. If one is guilty of something, one has done something wrong,” he argued.
In the coronavirus crisis, some people will die whatever choice their government makes, making questions of guilt complicated.
“Regardless of what the government does, it will be responsible for some of its citizens dying. Responsible in the sense that they could have made a different choice where it is at least possible that some of those who died would not have died.”
“It is not a question of if citizens will die as a result of the choices a government makes, but how many will die and which citizens will die,” he argued Ezio Di Nucci, Professor of Bioethics at Copenhagen University. Photo: private
According to Di Nucci, the most obvious trolley issue would have come about if a country had opted for a full herd immunity strategy, in which authorities deliberately allowed the virus to spread with a view to creating an immune portion of the population.
“There is the idea that if we aim for herd immunity, we are sacrificing some citizens for whatever we hope to achieve through herd immunity, which might be socio-economic considerations, but also fewer deaths in the longer term,” he said. “There the question is whether we are as a government or society are killing those ‘sacrificed’ citizens, or merely letting them die.”
This, he argued, may be part of the reason why Sweden's government has continually denied having herd immunity as part of its strategy.
“In the Nordic context, you might have noticed that the Swedish authorities have been careful not to characterise herd immunity as an aim, but just as part of a wider lockdown strategy to contain the virus,” he said.
“Philosophically (but possibly also legally), those rhetorical distinctions might be taken to be ways of allowing for the possibility that those citizens are not intentionally killed by the government/society as means to the end of herd immunity or socio-economic recovery”.
Even if it is accepted that Sweden has not been following a herd immunity strategy, he continued, the decision of Sweden's authorities to refrain from closing elementary schools, cafés, bars, restaurants and shopping centres, could also put it under ethical and even legal jeopardy.
Denmark, he argued, faces different but similar issues.
“If we imposed lockdowns with the aim of saving lives, given that we know that lifting restrictions will cause more deaths than by keeping the lockdown in force (at least in the short term), can we argue that the government is not intentionally killing those that will die as a result of the lifted restrictions?” he said argued.
Aside from the risk that governments who lift restrictions might find themselves blamed by the public, there is also, he argued, a risk that they might end up being sued by the loved ones of some of those who die as a result of the virus.
“These fine ethical distinctions might have big legal consequences – in many jurisdictions it shouldn’t be too difficult to sue the relevant decision-makers, for example,” he said.
Di Nucci argued that many philosophers would argue that the 'Doctrine of Double Effect', first proposed by Thomas Aquinas back in the 13th century, could help justify some of the actions of both governments.
This is the argument that an action that causes a serious harm, such as the death of a human being, as a side effect of promoting a good end can be ethically permissible, even through actively causing the death of a human being to cause a good end would not be.
“Double effect,” he said. “might come in to help by allowing us to say that those who die as a result of lifting restrictions are only foreseen side-effects (collateral damages), and not intended means to the end of socio-economic recovery.”
He argued, however, that in his opinion this doctrine was not enough to get Denmark or Sweden off the hook.
“To take the case of Covid-19: if we can argue, following the doctrine, that the excess deaths which will result from lifting restrictions are merely foreseen side-effects but not intended means, on what grounds are we then not allowed to also argue that the excess deaths which will result from aiming at herd immunity are also not intended but merely foreseen side-effects?” Jakob Green Werkmäster, a philosophy lecturer at Lund University. Photo: Private
Werkmäster agreed that the doctrine was “not tenable”.
It was also wrong, he argued, to see the issue solely in terms of deaths.
“There are more consequences of the government's choices to the lives of a country's citizens than the number of dead. One such factor is number of lived years that are lost. In one respect, if we have the option of saving a teenager or a person who is a hundred years old, the expected number of future years to live seems relevant.”
There are also questions of intergenerational justice, with harsh restrictions, for example, potentially punishing school leavers disproportionately, he added.
Finally, governments faced by the coronavirus crisis have only the most basic understanding of how their actions will affect the death rate anyway, making the situation very different from that of the person with their hand on the lever in the trolley problems.
“As it stands,” Werkmäster pointed out, “we do not yet know which track contains the fewer amounts of people.”
“Our moral lives are complex and our moral reasoning should be too,” he concluded. “It is seldom a real life situation fits perfectly with a thought-example such as the trolley problem.”