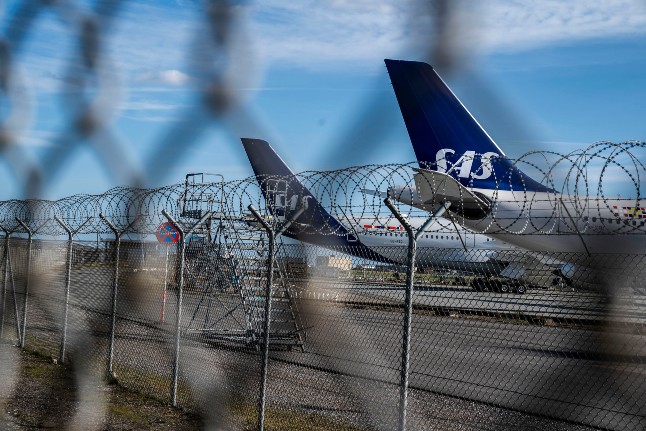 The runways at Copenhagen Airport have been converted into parking space for grounded passenger jets. Photo: Martin Sylvest/Ritzau Scanpix
Brian Vad Mathiesen, professor of energy planning at Aalborg University, was given energy consumption data from the power grid Energinet, from Copenhagen Airport, from the gas industry organisation Envida, and from fuel retailers Circle K, and OK.
He then used them to calculate the likely drop in CO2 emissions between March 11 and May 10, when Denmark will have faced the most severe restrictions, for Denmark's state broadcaster DR. He also made allowances for the seasonal rise in energy consumption over Easter.
Vad Mathiesen found that carbon emissions had by fallen 16 percent over the lockdown, enough to decrease Denmark's total carbon emissions by five percent over the whole year.
But rather than seeing the reduction as positive news for the environment, Vad Mathiesen instead said that it underscored how challenging it will be for Denmark to meet its challenging target of cutting carbon emissions by 70 percent by 2030.
“People feel that some very drastic things have happened with coronavirus, and yet we can only see a decrease of about five percent in carbon emissions,” he told DR.
“That says something about the great challenges we face after coronavirus. We cannot cope with the climate crisis by shutting down Denmark, and even if we did, it would not be anything like enough.”
The expected five percent reduction in emissions this year is roughly equivalent to the cuts Denmark will need to make every single year up until 2030 if it is to meet the target.
Climate minister Dan Jørgensen agreed that the impact of the lockdown illustrated the “gigantic task” the nation faces: “Although we have shut down the world, we are nowhere near achieving the goals we need to achieve.”
As a result of the lockdown, Copenhagen Airport lost more than 95 percent of its traffic, road traffic fell 25 percent, and electricity consumption fell by 7 percent.
Peter Møllgaard, chairman of Denmark's Climate Council, told DR that he hoped that video meetings, home-working and reduced flying would continue even after the crisis is over, leading to a permanent reduction in emissions.
“The planet has got a little respite. The coronavirus crisis is good for the climate in the short term, and we can learn from the coronavirus [crisis] how to deal with the climate crisis,” he said.
Kent Damsgaard, director of Danish Industry, said the dire economic impact of the lockdown showed that simply reducing consumption and activity came at too high a cost to be a reasonable response to climate change.
“If you want to go the path where you slow down growth… and whip yourself and stop doing a lot of things, then it is an impossibly expensive way to reduce CO2 emissions,” he said.
Climate minister Dan Jørgensen agreed that changes in energy production and transport technology rather than reduced consumption were the best way to meet the country's “extremely ambitious” targets.
“Right now we cannot say how we can achieve the goal. But if we knew how to reach the goal, it might not be ambitious enough. We must force ourselves to develop, and create innovation and research,” he said.