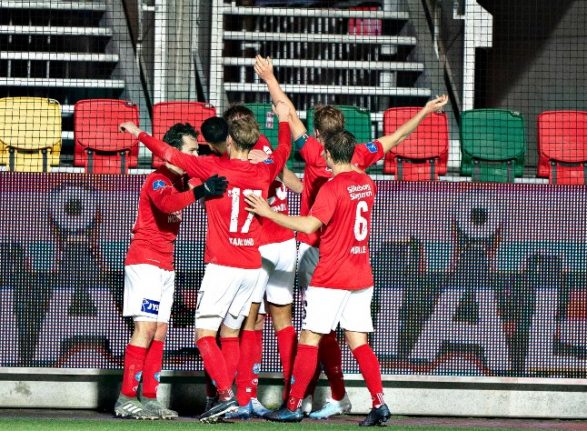 Silkeborg IF's Nicolai Vally celebrates a goal on March 9, a week before the Superliga was suspended on March 18. Photo: Henning Bagger/Ritzau Scanpix
“With the new figures from Aarhus University, we are down to a minute size [of risk],” Allan Randrup Thomsen, a professor at the Department of Immunology and Microbiology at the University of Copenhagen, told Danish state broadcaster DR.
“I would say that it underpins the conclusion I myself came through just by thinking through it logically: football does not pose a real infection risk.”
According to Denmark's National Board of Health, people are only at a serious risk of coronavirus infection if they are within two meters of an infected person for 15 minutes.
According an analysis of 14 Danish Superliga football matches carried out by researchers at Aarhus University, if one player is infected, each of the other players will be within infection distance for an average of only one minute and 28 seconds over the course of a match.
The calculations were based on a study of the movements of professional footballers in 14 Danish Superliga matches.
Claus Thomsen, Director of the Divisionsforeningen, which groups together Denmark's 14 Superliga clubs, said that the study gave support to plans to restart the league, albeit initially without teams' supporters.
“We think it's a really interesting study,” he said. “This study confirms that if we operate within those guidelines [which we have drawn up], it is perfectly justifiable to restart the Superliga. We are pretty much ready to press the go button when we get the feeling and assurance that the authorities agree.”
READ ALSO:
Thomsen said his organisation had drawn up detailed guidelines on how teams can train and play matches without spectators, while minimising the risk of spreading the infection.
Thomas Bull Andersen, the associate professor at Aarhus University who was the study's third author, said that the low 1 minute and 28 second exposure time only held if there was just one player infected.
If two players are infected, then each player will be exposed to the virus for just under three minutes, if three, 4.5 minutes and so on.
The study, which has not been peer reviewed, came as a rival study from researchers in Italy and Germany warned that elite athletes were at a greater risk of getting coronavirus in their lungs, risking complications such as pneumonia and acute pulmonary failure (ARDS).
“Breathing changes dramatically during strenuous exercise with a tremendous increase in ventilation,” the researchers Paolo Matricardi, Roberto Dal Negro and Roberto Nisini wrote in the study, which has yet to be peer-reviewed. “Professional athletes are particularly at risk because of their frequent extreme and prolonged exercise.”