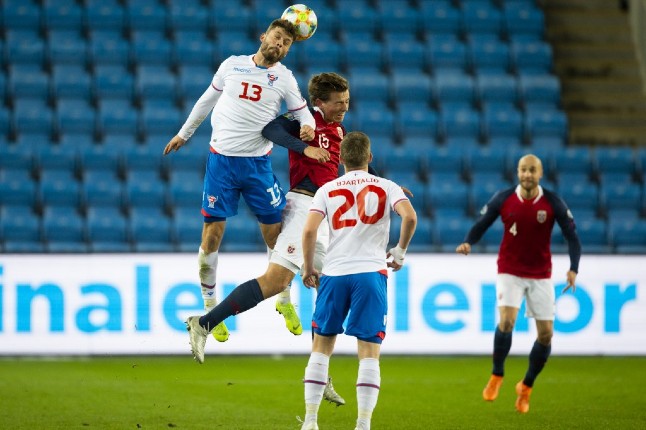 Faroese defender Rógvi Baldvinsson (top) during a match against Norway. Photo: AFP
“The Faroese tournament (Betri Deildin) starts on Saturday, May 9th. But for the first few matches it will be without spectators,” the association's spokesman Hans Erik Danielsen told AFP.
The number of matches to be played without spectators has not yet been determined.
Ten clubs are competing in the championship, which was initially scheduled to start on the first day in early March and is expected to end in November.
The Faroe Islands, an archipelago of 18 islands in the North Atlantic, have a population of just over 51,000 and have recorded 187 cases of COVID-19, including 180 recoveries.
The territory closed its borders in mid-March and introduced a battery of restrictions, including the closure of schools, which it has been gradually lifting since April 20.
The record crowd for a football match on the islands is 6,642 for an international against Malta in 1998.