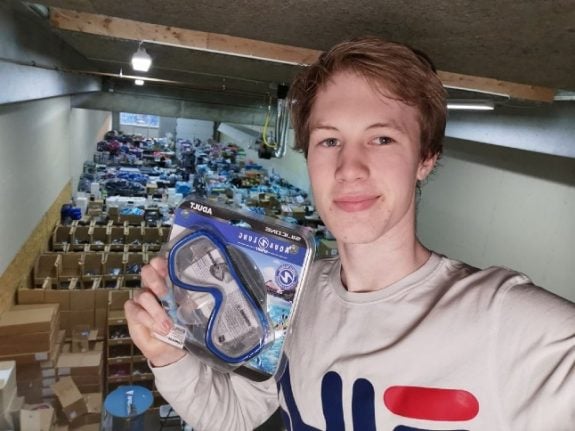 The 21-year-old Danish entrepreneur Daniel Johannesen is donated at least 1,000 pairs of goggles to health personnel. Photo: Watery
Kurt Espersen, chief executive of the the health authority in the Region of Southern Denmark, said the shortages were so acute that his purchasing department had had to consider all options.
“We have to think out of the box and look elsewhere. For example, we have bought a lot of swimming goggles,” he told the Jyllands-Posten newppaper. “And we also have a look at the visors you use for fireworks as alternatives to the more classic visors.”
At the same time the 21-year-old Danish entrepreneur Daniel Johannesen, who sells swimming googles through his web shop Watery, has decided to donate at least 1,000 pairs of swimming goggles to hard-pressed Danish health authorities.
In this unusual time, we have to help where we can, and right now I have a lot of diving masks and swim goggles that are stuck in my store, because no one can go to the swimming pool or on a diving holiday,” he told the Avisen newspaper. “So they may as well be of benefit to those who really need them right now.”
The Danish Medicines Agency on Monday said it was working with Danish companies to increase the production of face masks, hand sanitiser, and other protective equipment.
“We are in the process of gently prodding companies on the stomach and knocking on doors in, so that we can start national production of some of the protective equipment we currently lack,” Thomas Senderovitz, director of the Danish Medicines Agency, told Jyllands-Posten.
Lisbeth Bavnsgaard, an emergency nurse, told the newspaper that she was worried shortage of protective equipment might lead to more patients getting infected.
“I am not so worried about my own health, but I cannot live with the idea that I might carry the infection from one citizen to another because I do not have enough protective equipment or hand sanitiser, which is also in short supply,” she said.
Nurses in her hospital, she said, were considering buying visors used by craftsmen to supplement the protective equipment supplied by their employer.