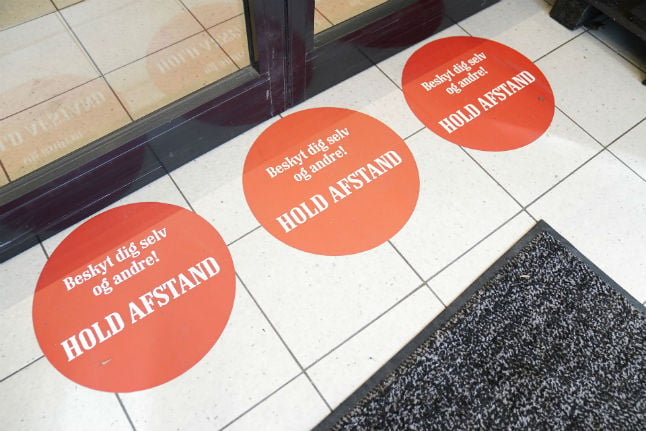 If you've got a question, please fill in the quick form in the article below.

Tell us: What questions do you have about the coronavirus in Denmark?

We'll update this article over the coming days and weeks with the answers as we are able to respond to them, checking with relevant authorities when needed.

Please note that that while we verify all the information about the coronavirus we publish on The Local with authorities, we are not medical experts and cannot answer any medical questions. Instead, please refer to the website of the Danish Health Authority call your GP, or out of opening hours call one of the following telephone numbers
Copenhagen: 1813
Nordjylland: 70 150 300
Midtjylland: 70 11 31 31
Sjælland: 70 15 07 00
Syddanmark: 70 11 07 07
Denmark's government on Tuesday opened a hotline on 70 20 02 66, which will take calls from 9am to 10pm.
Here are the questions we have answered so far:
1. What do I do if I have symptoms?
If you have symptoms of coronavirus, such as a dry, continuous cough or a fever, you should stay at home and avoid social contact with people other than those you live with, according to the Danish Health Authority.
Focus on good hand hygiene, clean the toilet / bath and kitchen and rooms you share with others every day,  and wash bedclothes and underwear at at least 80C and other clothes at at least 60C.
Sneeze and cough into a handkerchief or into your elbow.
Medical experts now believe that people stop being infectious the moment their symptoms disappear, but the Danish Health Authority recommends staying home for an extra day or two just to be sure.
If you become so ill that you need medical attention, do not go to a hospital or a doctor's surgery, call your local GP, or one of the out of hours numbers listed above.
2. Does home quarantine mean I can't leave my house at all?
No. According to the Danish Health Authority, you can still walk outside, but you must try to keep a distance of between one and two metres from others, avoid touching door handles, wash your hands carefully and often, and sneeze into your elbow or a handkerchief.
If you do have to go out to the shops or a pharmacy, try to do so outside of peak hours to minimise the risk of infecting others.
Do not visit people in the groups most vulnerable to coronavirus infections such as elderly relatives and those with cheart conditions or diabetes.
3. Who is getting tested in Denmark?
As Denmark's strategy has now moved from the containment to the mitigation stage, it is no longer testing those with only mild symptoms unless they work in the health services or elderly care and are therefore at risk of infecting the most vulnerable groups. As of Tuesday morning, the country had tested 6,682 people.
4) The government communicated that the virus would hit in two waves, the first being the one we’re currently in that is expected to last 3 months (with the 2nd month being the peak), the second wave commencing in October.
What is unclear is how far we are into the first wave, and what are the characteristics of the second wave (duration, whether it is expected to be the same virus or a mutation, whether it will require similar restrictions etc. ?
We asked Christian Wejse, a researcher into infectious diseases at Aarhus University Hospital about this, and he said he wasn't aware of any official government position on the threat of a second wave. He said it was a phenomenon that had been seen in previous pandemics, but that too little was still known about the current coronavirus to know for certain.
“Same of us are speculating that this is something we might see, but I don't think anyone can make any reliable evaluation about it,” he said. “There's evidence for that [a double curve] because that's how epidemics usually evolve.
“If we base our estimates on previous experience of flu pandemics, such as Spanish Flu in 1918, I would worry that we could see a double curve, so that if we loosen the restrictions, then we might get another round, or a second wave slightly after the restrictions are lifted.”
5) How do we know that these measures will only last 14 days?
We don't. It's likely that the measures will be extended. “It's too early to answer that,” Denmark's defence minister Trine Bramsen told a journalist who asked that at a press conference on Wednesday. “We are following developments closely.”
Here are questions we have received and not yet answered:
Why does Denmark think that the solution to all its problems is closing borders?