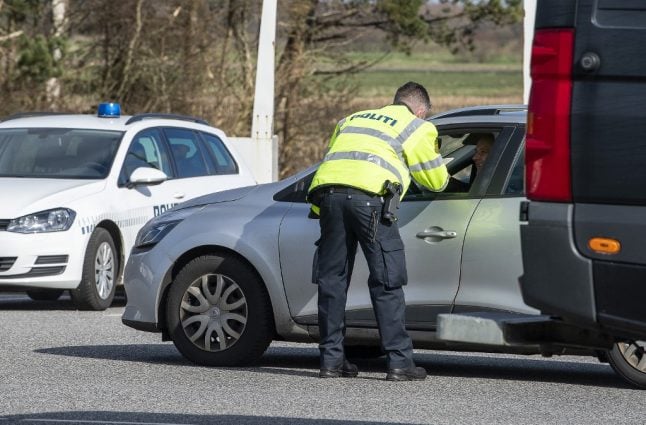 A police officer controls a car driver at the Danish border in Moellehus, Denmark, on March 14, 2020: AFP

Certain categories of people notably those who live and work in Denmark are still be able to enter. Travellers will be turned away if they can't show that they have a legitimate reason to be there, for example that they are Danish citizens or foreign nationals living and working in the country.

Expatriated Danish soldiers are not allowed to return to Denmark on leave until March 30th.

On Saturday, Copenhagen Police said that 13 people had been rejected at the Øresund bridge but there had been no refusals at Copenhagen airport.

There has been some concern from the tourism industry over the sudden closure of the borders.

The CEO of Feriehusudlejernes Brancheforening (The Holiday Homes Rentals Association) has said the closure will mean German holidaymakers must cancel 1.4 million nights in holiday homes until mid April.

Tønder's mayor Henrik Frandsen described the situation as deeply serious for the tourism and business of the town, which relies on those visiting from south of the border.

As of Saturday, Denmark has 827 confirmed cases of coronavirus and no deaths. According to the Worldometers website, this is the fourth highest per capita number of infections worldwide after Italy, Norway and South Korea. There are also nine confirmed cases in the Faroe Islands but no cases in Greenland.

Denmark's Ministry of Foreign Affairs changed its travel advisory so that the entire world is classed as 'orange'. This means it now recommends against unnecessary travel to any other country.

Danish citizens currently abroad are encouraged to return to the country immediately.

“If you are already abroad, you should return home as quickly as possible,” Foreign Minister Jeppe Kofod said at the press conference on Friday, stressing that this advice only applied to Danes travelling, and not those permanently resident abroad.

At Friday's press conference, the government also announced that hospitals in the country would stop carrying out all normal medical procedures to concentrate on essential and emergency medical care and treating those infected with the virus.

Danish public broadcaster DR have provided a list of which categories of people will be allowed to cross the border.