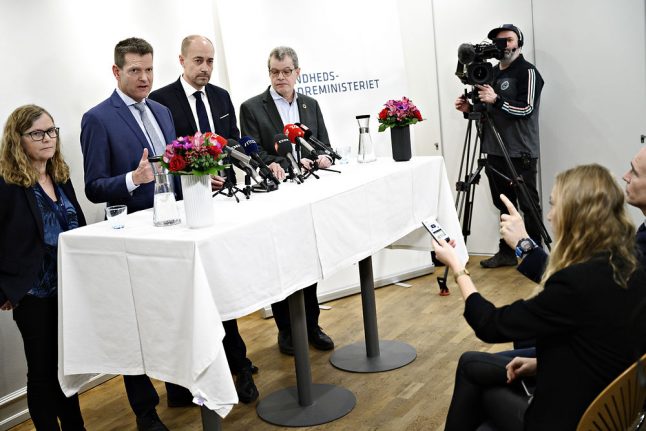 “The man who came back from a skiing trip with his wife and son on February 24th has been suffering since then from a cough and a temperature,” the Danish Health Authority (Sundhedsstyrelsen, DHA) said in a statement.

“The man tested positive, but the results of his wife and son are negative,” it said.

The man is relatively well, the agency said. He has returned to his home in Zealand, where he remains in isolation with his family.

“After the developments in Italy over the weekend, we had expected to see cases of Covid-19 [new coronavirus, ed.| in Denmark soon, so we are not surprised, and we must expect to see more cases in the coming days and weeks,” DHA wrote in a statement.

The risk of widespread infection in Denmark is still considered to be low, as is the risk of Denmark's healthcare system struggling to cope with the demands of managing cases.

DHA director Søren Brostrøm and Minister for Health Magnus Heunicke have both warned that more Danish infections are likely to be confirmed in the coming days, but have also urged calm.

“We take the new situation very seriously. Work to contain and trace has now begun. We will do all we can to avoid symptoms spreading in Denmark,” Heunicke sauid.

Brostrøm urged people in Denmark not to panic. He also advised people who have been in outbreak countries who are experiencing symptoms not to present at hospitals or attend doctors’ surgeries, but to contact health authorities by telephone.

READ ALSO: Who to call and what to say when contacting health authorities in Denmark

“Don’t panic (if you think you have symptoms). You can be assured that our health system is ready – we have not switched to maximum alert yet, but are prepared to do so if necessary,” he said to TV2.

The virus often begins with symptoms resembling a common cold and can develop into respiratory infection. The elderly and people with already-weakened immune systems are most at risk of serious complications.

“With (new coronavirus) it seems that most people have mild symptoms, but the elderly and people who are already sick can get very ill and die,” Brostrøm said.

The first Danish person to have been infected is an employee of the broadcaster TV2, who had been on holiday in the Sondrio region in northern Italy, the area of Europe which has seen the highest number of cases.

In a Facebook post, the man, Jakob Tage Ramlyng, wrote that he and his family were “deeply shocked” that “what we thought was highly unlikely is now reality for us”. He acknowledged his post would be cited by media.

Colleagues of Ramlyng at TV2 may now be contacted by health authorities and some may be placed in quarantine at their homes.

DHA director Anne-Marie Vangsted said the authority was already working to trace people the man may have been in contact with.

“We will contact people who have been in close contact with him, that is, people who sat close to him on the flight and after he came back to Denmark,” Vangsted said.

Brostrøm said that proximity of “within two metres” of the infected man constituted a risk of infection.

The health authority director declined to comment on reports the man was briefly at work at TV2 despite feeling under the weather after his return from Italy, Politiken writes, but stressed general advice that “if you feel sick, go home. Leave your place of work.”

Broadcaster DR reports that 17 people were tested for coronavirus on Wednesday night, with the TV2 employee the only one to return a positive result. Testing is conducted by infectious disease research centre Statens Serum Institut (SSI).

Italy has reported 400 coronavirus cases, mostly in the north, and 12 deaths.

Norwegian health authorities confirmed the virus had been detected in someone who returned from China last week, but said the patient was not “in danger”.

READ ALSO: How likely is a coronavirus outbreak in Denmark?