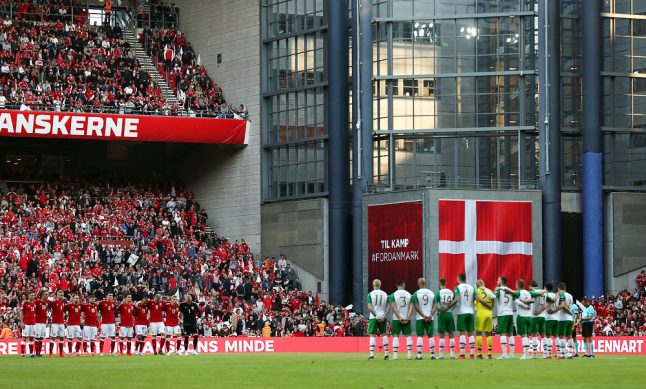 This year's tournament will be spread over 12 European cities ranging from London to Rome to Baku, meaning fans will criss-cross the continent and descend on different cities.

Those supporters will of course need housing, transport and food, all of which will contribute to their carbon footprint.

“It's always a paradox when you invite people to come to your city… of course it has an impact on carbon emissions and the environment,” Copenhagen's mayor Frank Jensen told AFP.

“We are focusing on how we can host a huge event with a lower carbon footprint,” added the 58-year-old Social Democrat who has run the city since 2010.

The Danish capital, which was designated the European Green Capital in 2014, is trying to do everything it can to make Euro 2020 as green as possible. Recycled cups will be used, organic food will be served, waste management will be used and the use of single-use plastics will be limited.

With the addition of UEFA's promise to plant 50,000 trees in each of the 12 host countries to offset emissions, Copenhagen claims it will be able to limit the environmental impact of the four matches it will host.

But Jens Peter Mortensen of the Danish Society for Nature Conservation thinks more can be done, and efforts could especially be made when it comes to the restaurant business.

“They should definitely do better to prevent the spreading of all single-use plastic,” Mortensen said.

The games are by and large welcomed by residents of the city, especially since the national team will be hosting their Group B matches against Finland, Belgium and Russia.

Football is a unifying force in the small Nordic country of five million inhabitants, of which some 300,000 play the sport regularly enough to be registered.

In Copenhagen, there is no need to build anything to host athletes and fans, as the city already has the appropriate infrastructure – a 38,000-capacity stadium and a brand new metro.

“It's not fair to say that the Euro games would have a new impact since there would have been events in the stadium anyway,” Mortensen conceded.

The absence of any new construction helps reduce the carbon footprint of the event, but neither the city nor the federation know what the final impact will be.

The footprint in Copenhagen will depend on “many things which will not be clear until the tournament is over — the number of tourists, fans, officials and so on visiting due to the tournament,” said Mia Kjaergaard, spokeswoman for the Danish football association (DBU).

Environmental concern is already well established in the Scandinavian capital and 40 percent of trips are by bicycle.

Natural disasters have also pushed climate change up on the agenda.

In 2011, torrential rains flooded Copenhagen neighbourhoods, causing damage of more than one billion euros, according to Mayor Jensen.

Maria Figueroa, a professor at the Copenhagen Business School and a memberof the IPCC (Intergovernmental Panel on Climate Change), thinks the Euros can be “an opportunity” to showcase new initiatives.

“I think Copenhagen can show a new path, new ways to host events and at the same time being responsible,” Figueroa said.

For Figueroa, this could include raising awareness among visitors to the city.

“As part of an event you need to eat, to be housed, to use transportation. In each one of these areas there are opportunities to demonstrate how sustainability can be part of your life,” she said.