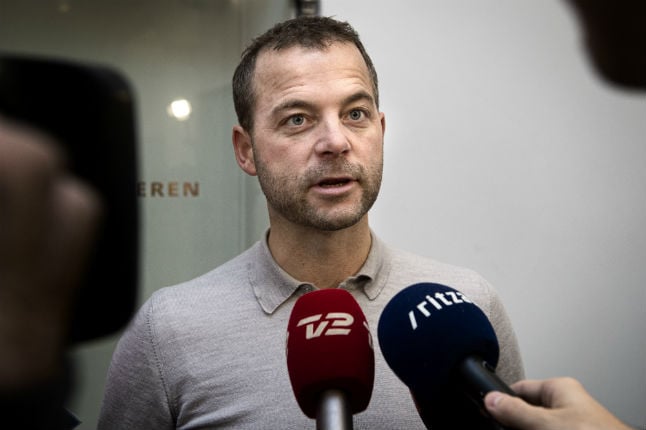 Morten Østergaard during negotiations on Denmark's budget in October. Photo: Ida Guldbaek Arentsen
The proposal comes after eight of the ten parties represented in the Folketing, the country's national parliament, agreed to back a new climate law which commits this and future governments to cut greenhouse gas emissions by 70 percent from 1990 levels by 2030.
“The sharpest tools we have in the box are taxes and charges,” Morten Østergaard told the Politiken newspaper in an interview published on Saturday.
“It should be cheaper to live 'green' and more expensive to live 'black': that applies to how we transport ourselves, how we shop, and to our workplaces. That's the principle which should run through the reform of the tax system.”
The Social Liberal leader, who played a key role in pushing Denmark to adopt its ambitious new goal, stressed that these new green taxes should be offset by tax cuts elsewhere. This would put more money in people's pockets, making it easier for them to choose greener options.
“That most obviously could be on income tax. We also need to make sure that those who are on benefits can afford to pay, so it could also be [changes to] the tax threshold. It's all about basic income,” he said.
READ ALSO:
The party's proposals came as Denmark's government prepares to begin work on the country's first National Climate Plan, which will outline in detail how the country will meet its challenging target.
Dan Jørgensen, Denmark's energy and climate minister, said he supported the general approach, but would need to see the proposals in more detail.
“I want to study the proposals more closely, and then we will consider it in the context of the climate action plans later in the year,” he said.
“The task we face is very comprehensive and I am open to discussing any ideas. At the same time, the benchmark for both the government and myself is that the initiatives must contribute to real CO2 reductions, social balance and strong competitiveness.
“If that does not happen, I am afraid that we will lose the broad backing that we now have from the whole of Danish society for our ambitions.”
Troels Lund Poulsen, from the opposition Liberal party, told Politiken that he broadly supported the Social Liberals' approach.
“We support this, so long as the adjustments to taxes and charges are revenue-neutral,” he said. “Our aim is that it should not become more expensive either to be Danish not to do business.”
The proposal also has the backing of The Danish society for Nature Conservation, the country's biggest green pressure group.
“We think it is really sensible to reorganize the tax system so that it pushes people to pollute less and have a smaller climate footprint —  so that things that have a large climate footprint cost more, and other things cost a little less,” Lars Midtiby, the group's director, said.