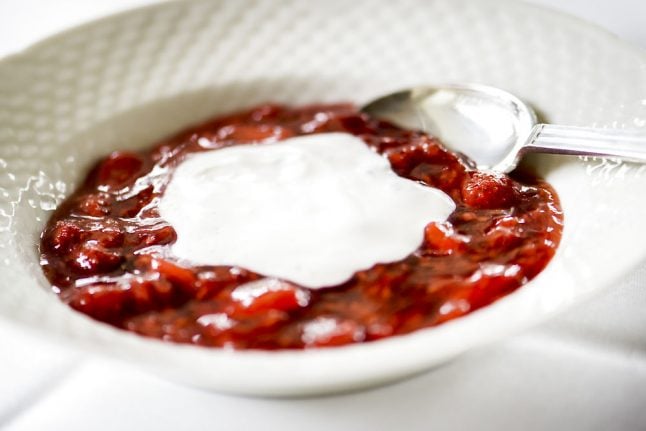 Does this dessert demonstrate the difficulty of Danish? Photo: Thomas Lekfeldt/Ritzau Scanpix

Newcomers to Denmark might recognise the warning often given to those starting out on the road to Danish fluency: ‘It’s one of the hardest languages in the world’, goes the oft-repeated wisdom.

The Foreign Service Institute ranks Danish as a “Category 1” language in terms of the amount of time needed for English speakers to learn it – no different to French, Italian or Spanish, but easier than German and non-European languages.

So is Danish really as difficult as the reputation that precedes it?

Although the answer to that question depends on a number of factors, Danish is not generally harder than comparable languages like German, English or French.

There are several reasons for this, says linguist Kasper Boye, associate professor at the University of Copenhagen’s Department of Nordic Studies and Linguistics.

“Another reason is that languages are complex entities. Sound systems, syntax and morphology [grammar, ed.] can vary to different degrees from what a person knows from their first language. As such, syntax and grammar can be relatively difficult, while sounds seem easy, or vice versa,” the linguistics professor added.

For those who have tackled learning Danish in adulthood, a variety of experiences seems to prevail.

A straw poll conducted by The Local – though not a scientific measure – showed no overall agreement in the length of time readers felt foreigners in Denmark should take to learn the country’s language.

Betty Chatterjee, a long-term resident of Denmark who moved from the United Kingdom in 1972, says that although she managed to pick up the essentials in 18 months, that was dependent on several factors which might not apply to others.

“When I first came here, there weren’t so many foreigners as now. In fact, one of the first things I did was to go to Danish evening classes, and the first time I went I was the only student in the class. It was great, because I got a lot of attention, worked hard and learned the language relatively quickly,” Chatterjee told The Local.

The Brit, who is a qualified teacher, was unable to transfer her qualifications to Denmark initially and worked in a Danish børnehave (daycare) while still learning the language. After her qualifications were later accepted by Danish authorities, she continued to work in that field for the rest of her career – with the exception of a year spent in Italy – before retiring in 2002.

She said she felt her experience learning Danish in the 1970s would naturally be different from that of other people at other times.

“It’s a very individual thing. It depends on your level of education, your motivation, whether you’ve learned other languages before. The amount of time at your disposal, your environment.

“For me, especially when I first started work, I didn’t have much choice in the matter. I couldn’t speak English to the children and it’s a big myth to say everyone speaks English [in Denmark],” Chatterjee said.

READ ALSO: You've just relocated to Denmark: what do you do next?

Those sentiments appear to be supported by linguistic research.

Four factors are amongst the most important in learning any language, Boye said.

The grammatical or phonological proximity of the language being learned with one’s own; motivation for learning a new language; ability or talent for learning a language (known as a sprogøre – literally, ‘ear for language’ in Danish); and the amount of work put in to learning are key, according to the linguistics expert.

In that regard, Danish does have some features that might set it out as a difficult language relative to others.

“Languages that, with regard to a certain parameter, are extreme or rare can be perceived as being relatively difficult to learn by a lot of people, provided they speak a different and completely unrelated language,” Boye said.

Though Danish syntax and grammar would closely resemble that of other European languages like English, German and French for, say, a Chinese learner, Danish does stand out somewhat when considered in terms of its sounds.

“Danish has an extremely high number of vowels – an analysis has shown that it has four times as many vowel sounds as Italian, for example – so many people will find it difficult to learn the difference between Danish vowels,” he explained.

Armenian Byurakn Ishkhanyan, who moved to Denmark after being offered a PhD position in the field of psycho- and neurolinguistics at the University of Copenhagen, has spent three and a half years living in the country. Ishkhanyan attended language school and has now passed Prøve i dansk tre, the final examination in the programme for Danish taught at the country’s language schools.

But the scholar, who already spoke fluent English and advanced Russian and French, as well as her native Armenian, when she moved to Denmark, says that she doesn’t yet feel as comfortable using Danish as she does in her other languages.

“Recently, a woman approached me in Berlin and asked me in English to help her to buy a train ticket. She could hardly speak any English and I realised that she spoke Russian, so I immediately switched to Russian. I am not sure I would switch to Danish as easily,” she said.

“I took courses for the first two and a half years I was in Denmark and stopped after realising that the classroom setting doesn't improve my communication in Danish with Danes,” Ishkhanyan told The Local.

Tellingly, the Armenian admitted that she put more effort into learning French – the best basis of comparison she has for foreign language learning – than Danish.

“I must admit that I didn't put that much effort into Danish as I did with French. I was watching French movies all the time and reading French literature, doing all the homework and making sure I had learned all the new words,” she said.

“Of course, there is the difficulty of Danish phonology, but I think it's just some difficulty that everyone will overcome eventually,” she added.

Both Ishkhanyan and Chatterjee said that, regardless of how long it might take, they felt learning Danish was vital to feeling at home in the Scandinavian country.

“I think it's really important that foreigners start learning Danish from day one, if they intend to stay there for longer than a year. Of course English is widespread in Denmark and one can theoretically survive here for their entire lifetime without speaking a word of Danish. But learning the language shows respect towards the host culture and one should do their best to learn it as fast as possible, if they want to be part of that country,” the Armenian said.

For retired teacher Chatterjee, not learning the local language in any country is a missed opportunity.

“You really cheat yourself of a great many cultural opportunities if you don’t learn the language and it’s also a bit of an insult to your host country. You don’t have to give up your roots or your home country, you just have to make an effort to learn,” she said.