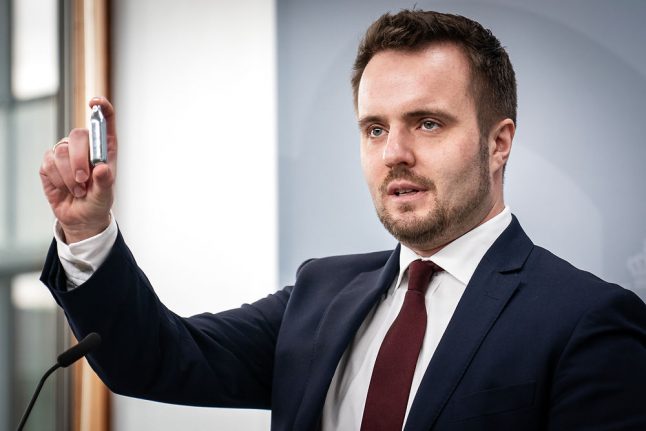 A new government plan to crack down on the use of laughter gas as an intoxicant among young people includes the proposed ban on sales.

Minister for Industry, Business and Financial Affairs Simon Kollerup and Minister of Health Magnus Heunicke announced the plan at a press conference on Monday.

“Many people have seen the gas cartridges lying on our streets. And there are many sad stories about how young people are affected, including at festivals during the summer,” the minister continued.

“The government sees this as a major problem and is therefore calling for political discussions,” he added.

Specifically, the government is proposing to introduce a minimum age of 18 for the sale of laughter gas cartridges.

Laughter gas used as an intoxicant is also unsafe for people over 18 years old, so the age limit is not the sole measure being proposed.

The government also proposes restricting sales such that only two eight-gram gas cartridges may be sold at a time.

Larger containers of nitrous oxide would only be permitted for industrial purposes and for restaurants, and would not be sold to private individuals.

Additionally, fines will be made harsher for businesses that flaunt the rules on sales.

Current rules already prohibit the sale of nitrous oxide cartridges for ‘non-safe’ purposes – such as intoxication.

That applies to internet sales as well as at kiosks, bars and stores.

Used as a means of intoxication, nitrous oxide can cause serious health damage, and can result in suffocation in the most serious case.

Regulation of laughter gas has previously been on parliament’s agenda, with a bill reaching the final hearing stage in May this year.

But the bill lapsed after June’s general election was called.