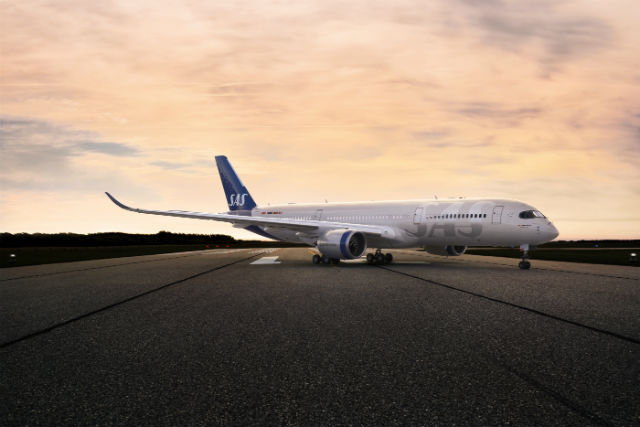 Simon Pauck Hansen, Chief Operating Officer of SAS, argues that new, more efficient planes can be part of the solution. Photo: SAS
The partnership will be a key part of the country's push to reach its ambitious goal of slashing CO2 emissions by 70 percent by 2030.
Simon Pauck Hansen, Chief Operating Officer of SAS, is to be partnership's chairman. He will look at how new, lower-emissions aircraft and lower emissions fuels can be used to achieve Denmark's “extremely ambitious but not unrealistic” goals.
“There is both new technology in the market in the form of new aircraft, and technology on the way with new fuels that can help us to drive current aircraft operations more sustainably,” he said in a press release issued by Denmark's Transport Ministry on Wednesday.
“We believe that the right thing to do is to switch the industry to a lower emissions, rather than to punish the industry and force it outside the country.”
READ ALSO:
Pauck Hansen will now seek to bring airlines, technology companies and government bodies together into the partnership to seek to understand how best to drive the transition.
Transport minister Benny Engelbrecht said he did not believe that the solution was to reduce the number of flights taken by Danes.
“We depend on aviation to be able to get around the world effectively. Therefore, it is imperative that we continue to fly. But we must and must fly greener than we do today,”  transport minister Benny Engelbrecht (S) said in a press release.
SAS, which is positioning itself as an aviation industry forerunner in reducing emissions, highlighted the announcement on its Twitter feed.

Today, the Danish Minister for Transport, @BennyEngelbrech, announced that @SAS COO, Simon Pauck Hansen, will spearhead a partnership between the aviation industry and the Government to reduce CO2 emissions by 70% in 2030 #travelersforthefuture #flysashttps://t.co/LmOM0rqFUv

Denmark's climate minister made a similar point at a briefing with journalists last week, arguing that reducing the number of flights could not be the solution.
He said that the world's population was likely to hit 10 billion by 2050, and that a bigger percentage of those people would be middle income.
“More will eat meat, more will have a car, more will have an air conditioner, more will have a fridge and more will fly,” he said. “So no matter what we do to limit, just a little bit, our plane ride. That's not going to solve the problem”
“The only thing that can solve the problem enough for us to stay on the 1.5 degree is to make plane transportation green.” Simon Pauck Hansen will lead the new public-private partnership. Photo: SAS
Pauck Hansen noted that electrical aircraft were a possibility for the future, “but we probably have a few years to go”.
In October, he sent a proposal to the Danish Ministry of Transport proposing that a $5 surcharge on flights leaving Danish airports be used to generate up to 300m Danish kroner which would go to research low emissions flight technologies.
“We believe that this is a price that consumers are willing to pay to contribute to the green transition,” he said.