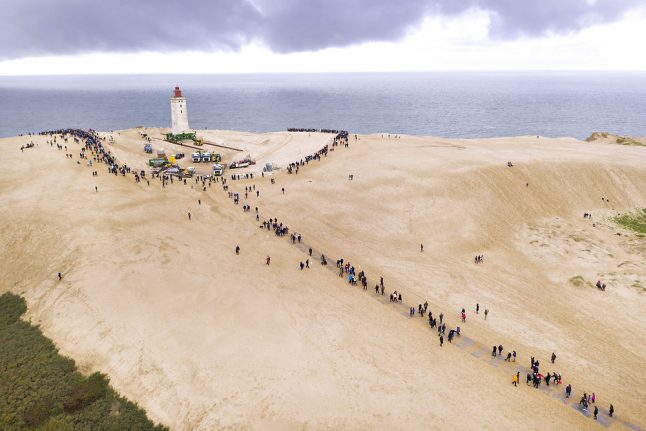 Rubjerg Knude Lighthouse was moved 80 metres inland from its location since 1889, to protect it from falling into the sea as erosion eats away at the coast.

The lighthouse was once also the location of a museum about sand drift, but the buildings around the main structure were abandoned in the 1990s, themselves victims of drifting sand.

It is hoped that Tuesday’s relocation, which was followed by media from around the around as well domestically, will secure the future of the lighthouse for the next three or four decades.

But the story of the moving lighthouse could itself have come straight from the manuscript of a television drama, according to a Danish expert in regional tourism.

“It has all the ingredients you need for drama and excitement,” Peter Kvistgaard, a Ph.D. in regional tourism policy and part-time lecturer at Aalborg University said.

Making the comparison with a well-made Netflix series, Kvistgaard said three key elements were present: spectacular nature, tension over whether the lighthouse would survive; and the cast of characters involved in the project.

“The nature out there is spectacular. And when you add an extra level of spectacle by moving a lighthouse which many would consider one of the most immovable and reliable objects in the world, something special happens,” Kvistgaard said.

Local interest in and support for the lighthouse was further boosted by the involvement of a local business owner at the forefront of the project.

“In addition to the drama over whether the lighthouse survives the move, there’s also an exciting character in the form of the local master builder [Kjeld Pedersen, ed.], giving personality and believability to it all. It’s a person you can identify with,” the tourism expert said.

“It’s not a politician, but someone who knows something concrete about moving 700 tonnes,” he added.

Widespread interest in the event reflected its ability to capture the imagination, according to Kvistgaard.

“There’s a colossal interest all over the world in unusual and difficult relocations. Moving a lighthouse must absolutely be considered difficult,” he said.