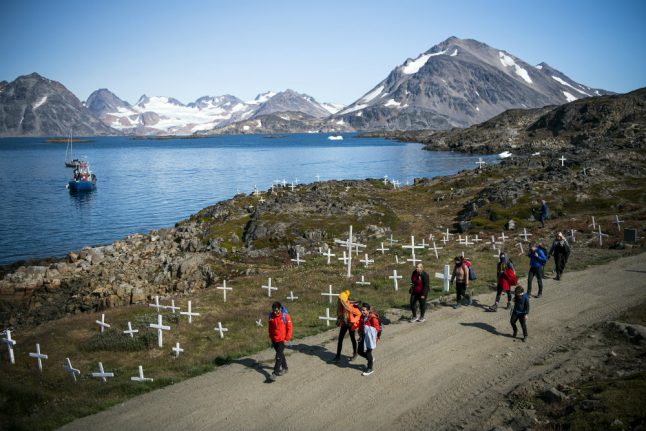 Many of the 85,000 tourists who visit each year head to the west coast, but eastern Greenland, with its glaciers, wilderness and wildlife starring whales and polar bears, is also drawing visitors.

Sarah Bovet, a 29-year-old Swiss artist, said it's hard to know what to expect.

“Thinking you're going to be surprised, you are even more so in reality,” she said standing outside a hostel in the tiny village of Kulusuk.

Bovet was on an artistic residency in Greenland when she visited Kulusuk and its 250 souls.

Although she had imagined a small village before arriving, its stunning views and bright colours still came as a surprise.

With just one supermarket, an airport built in the 1950s by the US military to serve a Cold War radar base, and a harbour surrounded by brightly painted wooden houses, most of the villagers appreciate the extra revenue from tourism.

Justus Atuaq, a young hunter in Kulusuk, takes tourists out on sled tours in March and April — the spring high season — earning money that helps him feed and care for the dogs he uses for racing and hunting.

“Now I can take dogsleds for hunting, and sometimes tourists coming from other countries also want to dogsled,” he said outside his wooden house.

Arrivals to the island grew 10 percent year-on-year from 2014 to 2017, and three percent in 2018, according to the tourist board, Visit Greenland.

But they are not alone in taking an interest in the world's largest island.

The Danish territory's rich natural resources and growing strategic importance as the Arctic ice sheet melts have attracted the attention of US President Donald Trump.

The Arctic region has untapped reserves of oil, gas and minerals, as well as abundant stocks of fish and shrimp.

In August, Trump offered to buy Greenland, then called off a visit to Copenhagen over its refusal to sell.

Denmark colonised Greenland in the 1700s, granting it autonomy in 1979.

The territory still receives an annual subsidy from Copenhagen, which was 4.3 billion Danish kroner in 2017, and tourism could help it to become economically self-reliant.

Like many parts of Greenland, Kulusuk has no tarmac roads and visitors must travel by plane or boat.

The growth in tourism could put a strain on the village's infrastructure, and the sector faces unique challenges given Greenland's location, weather and the cost of travelling there.

Day tours of Kulusuk with flights from the Icelandic capital Reykjavik are 97,000 Icelandic kronur ($780, 700 euros). The 32-room hotel stands beside a fjord, and from its dining room, guests can watch icebergs drift by during the summer.

But the region's isolation can be problematic, Ipsen admits.

Greenland must tackle its infrastructure challenges if it wants to develop tourism, Visit Greenland says.

Government-funded work is under way to extend runways at the capital Nuuk and Ilulissat, both on the west coast, and a new airport is planned in the south.

Ipsen worries about the effects of uncontrolled tourism to the region.

“We want to try to maintain it as it is, so it's not exploding,” he said.

Already, said Johanna Bjork Sveinbjornsdottir, who runs tours in Kulusuk for an Iceland-based company, the rise in visitor numbers is making itself felt.

“In the campsites here out in nature where you used to be alone, there's two, three groups at a time,” she said.

Like Ipsen, she is also concerned about the effect that rising visitor numbers could have on the wilderness around the village.

“If you want nature to survive that, you have to build up the infrastructure,” she said, pointing to the lack of officially designated campsites around Kulusuk, with no rubbish bins or toilets for travellers outdoors and no one supervising the sites.

Despite the concerns, Sveinbjornsdottir hopes visitors will keep coming.

“They go back as different people,” she said. “Everything is beyond what you ever imagined.”