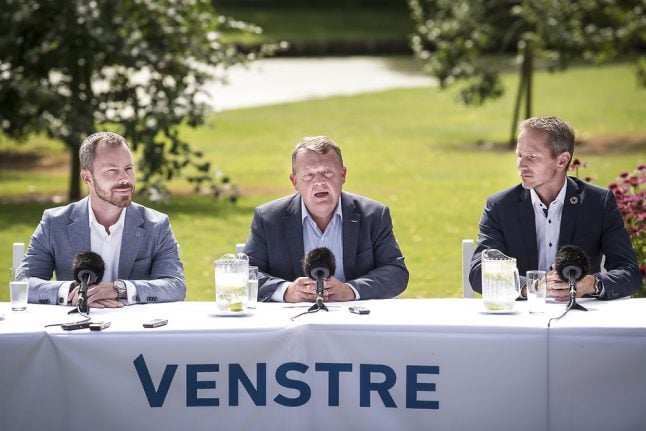 Former prime minister Lars Løkke Rasmussen wants to continue as the party’s leader in opposition, but tensions with Kristian Jensen, the former finance minister and deputy leader who was long-tipped as a future successor to Rasmussen as leader, threaten to curtail the time of both at the top of the party.

Weeks of internal manoeuvring leading up to a party leadership meeting has resulted in calls for both senior figures to step back from the party’s vanguard.

Rasmussen has been criticized by some sections of the party for his election-eve decision to make a cross-aisle governing partnership with the Social Democrats his top priority. He has faced similar criticism from other parties on Denmark’s right.

Other Liberal MPs, including the veteran former defence minister Claus Hjort Frederiksen, have spoken out in support of the former PM.

Prior to the election, Rasmussen said it was not “the law of nature” that the deputy leader of a party eventually takes over as leader.

Jensen, who is the party’s deputy leader, said in an August interview that he was against running another election campaign on a partnership with the Social Democrats, but later apologized at the Liberals’ summer meeting for breaking with the leadership line.

Rasmussen reconfirmed on Tuesday that he means to continue as party leader, Jensen subsequently said he will again seek to be elected as deputy leader, a position he has occupied since 2009.

Disaffection within the party's parliamentary group and membership appears to have resulted in an opening for Jakob Ellemann-Jensen, the environment and food minister in Rasmussen’s last government, while former immigration minister Inger Støjberg, a high profile on the party’s right wing, has so far been kept out of contention for a leading role in opposition.

“All over Denmark there is a lot of support for Jakob Ellemann-Jensen, and I could give him my full support should he be the one to take on leader’s duties,” Liberal member of parliament Preben Bang Henriksen told TV2 on Tuesday.

Ellemann-Jensen, whose father, Uffe Ellemann-Jensen, led the party in the 1980s and 1990s, has so far remained quiet about his prospects of taking over from Rasmussen, responding “not right now” when asked by broadcaster DR whether he wanted to be leader.

He has also said that he does not intend to challenge Rasmussen for the leadership.

“I intend to vote for Lars Løkke Rasmussen as the leader of the Liberals,” he said.

Henriksen and another Liberal MP, Carsten Kissmeyer, have both openly called for Rasmussen and Jensen to go, while the party’s Central Jutland Region representatives have pulled their support for the current leadership, saying new direction is needed for the party’s future and credibility.

The leader and deputy leader of the party will be voted for at the Liberal Party conference.

That is currently scheduled to take place on November 16th and 17th, but Rasmussen has speculated it could be brought forward to bring it ahead of the opening of the new parliamentary session in October.

READ ALSO: Power shifts in Denmark with the giving of gifts