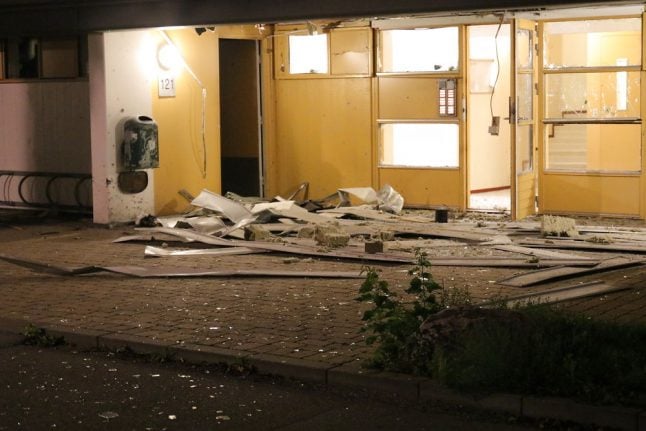 The explosion occurred at around 2am. Nobody was injured, but the building sustained significant damage.

Investigator Boye Rasmussen of Central and West Zealand Police said on Tuesday morning that it was “too early to say anything about a motive and suspect”.

“The eaves over the front entrance were blown off. So it was a relatively powerful explosion which must have had more in it than a cannon firing. Our assessment is that this would need explosive force equivalent to a hand grenade,” Rasmussen also said.

Fragments from the device were found at the scene, he added.

Police have called for public assistance as they investigate the incident and have set up a mobile police station near the scene of the blast.

The incident is not the first of its kind in Gersagerparken, a housing area in the town, which is 18 kilometres southeast of Copenhagen.

In April, six cars were damaged by an explosion, which also occurred at night.

After that incident, police said a hand grenade may have gone off and suggested an organized crime conflict could have formed a motive for the crime.

In June, a 27-year-old man was hit when shots were fired in the area. Several cars were also hit by the bullets.

That incident, which was described as an attempted killing, occurred during the afternoon and police said they were surprised that no members of the public had reported it. The injured man went to Hvidovre Hospital and informed medical staff he had been shot.

Police declined to comment further on links to gang crime on Tuesday.

“We have no comments in respect of the ongoing investigation,” spokesperson Camilla Schouw Broholm said.