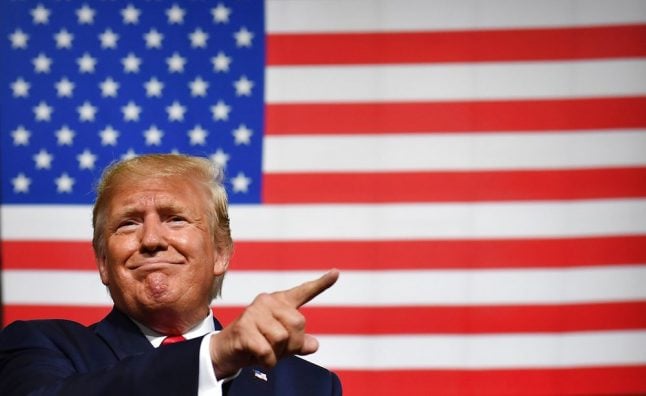 Why would Denmark want to welcome Donald Trump after his show of ignorance over Greenland? Photo: Nicholas Kamm / AFP / Ritzau Scanpix

The divisive American leader confirmed on Sunday last week's reports that he is interested in buying Greenland, a nation in its own right and a semi-autonomous part of the Kingdom of Denmark.

That is despite Prime Minister Mette Frederiksen calling the idea an “absurd discussion” and Greenland’s ministry of foreign affairs stressing the icy territory is “open for business, not for sale”.

In comments given to American media, Trump has described an envisaged deal to buy Greenland as “essentially… a large real estate deal. A lot of things can be done.”

His economic advisor Larry Kudlow, speaking to Fox News, described Greenland as having “a lot of valuable minerals.”

“I don’t want to predict it now… I’m just saying the president, who knows a thing or two about buying real estate, wants to take a look at a potential Greenland purchase,” Kudlow said.

In other comments, Trump seemed to suggest Denmark owed the United States subservience due to its Nato membership.

“Denmark essentially owns (Greenland). We’re very good allies with Denmark, we protect Denmark like we protect large portions of the world. So the concept came up and I said, ‘Certainly I’d be (interested)’,” he said.

Denmark is a member of Nato, which is regularly criticized by the US president, who says member nations do not pay a high enough proportion of their GDP for mutual defence alongside the US military.

While all this is going on, advertising hoarding at Copenhagen’s City Hall Square (Rådhuspladsen) appears to be smoothing the way for (or warning of) Trump’s scheduled state visit to Denmark on September 2nd and 3rd.

Trump political propaganda machine alive and well on City Hall Square in Copenhagen where he is historically unpopular and planning a state visit in two weeks. Someone please tell me who paid for this? pic.twitter.com/HIBlKt8sWP

That visit is likely to see wide-scale protests against Trump by a Danish public amongst which he is highly unpopular. They are probably aghast at the idea of the uncouth president being given the ceremonial treatment by Denmark’s royal family and government.

Even so, Trump himself on Sunday cast doubt as to whether the visit—for which huge amounts of Danish taxpayers’ money are presumably going into planning and security—would happen at all.

“I’m supposed to be going there,” Trump said in reference to the visit, in connection with his Greenland comments.

“I’m thinking about going there. I’m not necessarily, definitely going there, but I may be going. We're going to Poland and then we may be going to Denmark – not for this reason at all, but we're looking at it,” he said.

Why is he now casting doubt on whether the visit will take place? Is it a veiled threat that he will not grace Denmark with his presence if it doesn’t play ball over the bizarre Greenland purchase plan? He says they’re not connected, but there’s little reason to trust what he says. Is it just because Trump himself doesn’t really know what he’s supposed to be doing?

Whatever the case, Denmark should save itself the trouble and just cancel the visit.

Trump is the political embodiment of an impolite dinner guest.

If you invited someone to eat at your home, prepared your finest food, got out your antique cutlery and renovated the driveway so they could safely park, you probably wouldn’t appreciate it if they started talking about buying your brother, before then suggesting they might not bother coming anyway.

Denmark owes Donald Trump nothing and Greenland is not a piece of meat or real estate to be sold off.

But the United States is a vital ally for Denmark, so Denmark must therefore be accommodating and diplomatic and do all it can to keep relations between the two countries strong. Normally, that would include providing for presidential visits the public doesn’t want.

Nevertheless, neither Denmark nor Greenland should have to put up with Trump’s staggering arrogance and ignorance while affording him a state visit.

Perhaps getting in first and withdrawing the invitation would make the US president consider a little more courtesy, even if only for a second.

UKRAINE
OPINION: This is Russia’s war, but we Europeans need to learn fast from our mistakes
Url copied to clipboard!