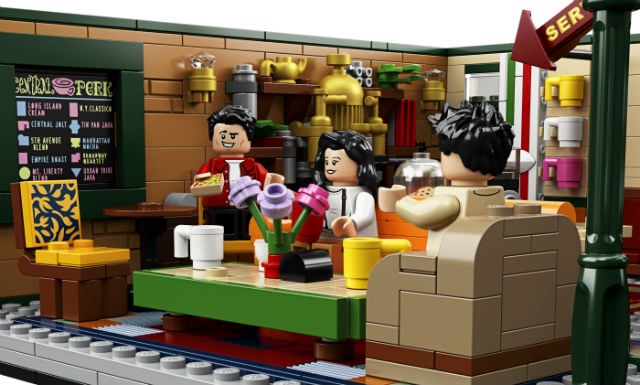 Is that supposed to be Monica and Joey? The Friends minifigures enjoy a java at Central Perk. Photo: Lego
The set will see the show's seven lead characters — Ross, Rachel, Chandler, Joey, Phoebe, and coffee shop worker Gunther —  immortalised as Lego minifigures, the company said in a press release.
It will also include the show's famous couch, an armchair and two chairs, and the stage where Phoebe performed her song  'Smelly Cat'.
Perry, who has recently faced high profile problems with depression, was the only cast member to bring attention to his the honour bestowed upon him.

Of the Friends @LEGO_Group I think you can clearly see that Chandler is the most attractive pic.twitter.com/YzqvZbTKi0 The main characters from Friends (Chandler, Ross, Monica, Ross, Phoebe, and Rachel). Photo: Lego
The set has been designed by Aymeric Fievet from Normandy, a Lego fan and Friends obsessive, who submitted the idea to the Lego Ideas fanpage back in October 2016.
“The challenge was to visualize passages of the series to allow me to recreate the furniture and the characters in as much detail as possible,” Fievet said in the release. “The assembly of this model took me about a week after finding the necessary references.”
The 1990s sitcom, which launched on September 22 1994, is one of the most popular TV shows of all time.
Set in a café in Manhattan, New York, it turned its stars Jennifer Aniston (Rachel), Courteney Cox (Monica), David Schwimmer (Ross), Lisa Kudrow (Phoebe), Matthew Perry (Chandler), Matt LeBlanc (Joey), and James Michael Tyler (Gunther) into some of the world's most high profile stars.