According to psychological health expert, Eugene Farrell, mindfulness is all about being fully present and aware of your surroundings. By practising mindfulness daily, you can enjoy the scientifically-proven benefits it can have on your overall wellbeing.

“Being mindful is one of the most ancient practices around the world and is practised by Buddhist monks. Its simplicity and effectiveness make it the perfect antidote to the demands of 21st Century life. Some small steps in the right direction could be a step change in your life,” says Eugene.

Here are five top tips on how mindfulness can help you make the most of your new life abroad, brought to you by AXA – Global Healthcare and The Local. Living in a new country means there are a lot of new places to discover. Mindful walks are a great way to explore the natural scenery or appreciate the culturally-rich architecture of your new home. Mindful walking is all about shifting your focus from stresses about the past and future, to the present moment. There are many ways to take a mindful walk, and as long as you are focussed on the moment – you are doing it right.

One method of mindful walking is to take notice of the sights and sounds around you: “Focus on the colour of your surroundings, the movements of your body and any noises you can hear. Can you hear people, animals or children? Can you feel the sun or a breeze? Do you notice any smells? Notice how you move into different spaces,” suggests Eugene.

Practising mindfulness can improve both our mental and physical health, which in turn can help us to improve our overall life – but it’s still important to have a sense of self-awareness and seek professional help when you need it.

Regular doctor check-ups are important, even if just for peace of mind. With AXA – Global Healthcare, you can have access to the virtual doctor service, whenever you need it. Speak to a qualified doctor online or over the phone, 24 hours a day, from wherever you are. One of the best parts of moving to a new country is trying the local food. Although enjoying a meal is important, mindful eating helps ensure you are eating right and making healthy choices.

According to nutritionist Georgina Camfield, it’s important to listen to your body: “Eat when you feel hungry and stop eating when you’re starting to feel full. By only eating when you need to, you’re giving your body the rest it needs to regenerate cells and boost healthy gut bacteria, both of which will help digestion in the long run.”

Getting enough sleep can have a positive impact on your day by improving your mood. To ensure you get enough sleep, start by creating a sleep routine; this can be done by setting an alarm clock to remind you to get to bed, and try to avoid screen time at least two hours before bedtime.

Sports nutritionist Thomas Rothwell says: “Sleep should be spoken about in the same light as physical activity and nutrition when it comes to our health and wellbeing. To put this into perspective, poor sleep is associated with fat gain, diabetes, heart disease and reduced productivity and mental skills.”

Get a quote for international health insurance with AXA Adapting to life in a new country can be difficult. There’s so much to take in and at times this can be stressful. Mindful breathing is an easy and effective way to deal with stress and anxiety.

“The solution is to take time each day, say 10 minutes during your commute or with breakfast – to focus on your breathing. This will allow you to calm your mind and body from the daily grind, clearing your head to think differently,” says Eugene.

Looking after your health should always be a priority, especially when you’re adjusting to a new environment. Finding the right health insurance policy can put your mind at rest, making the whole process a little easier. To find out about AXA’s international health insurance visit their website today.

This article was produced by The Local Creative Studio and presented by AXA. 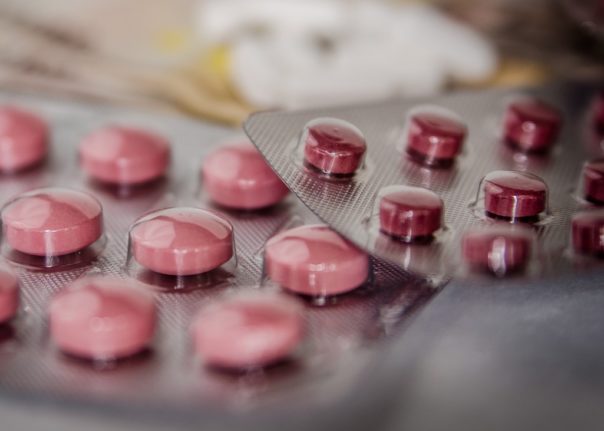 How prescriptions work in Denmark

You’ve seen your doctor and been given a prescription. Now what?

Once your doctor inputs the details of your prescription into the Danish health system, your data is available to any pharmacy in the country with a quick scan of your yellow health card.

All pharmacies in Denmark charge the same price for each medication, so there’s no need to shop around or commit to a single ‘home’ pharmacy — you can just swing into whichever is most convenient for you that day.

There are also online pharmacies that can fill your prescriptions and deliver them by courier or mail, or arrange for pickup at a pharmacy or another location. Remember to only purchase from websites with the green EU logo, according to the Danish Medicines Agency.

READ ALSO: What happens if you lose your Danish yellow health insurance card?

Do you have to pay for prescription medicines in Denmark?

Mostly, yes — as a rule, prescription medicines aren’t covered by the national healthcare system until you reach certain spending thresholds for the year. At that time, discounts will be applied to your future prescription medicine purchases based on how much you’ve already spent.

The scheme is called ‘reimbursement,’ which can be slightly misleading — the discounts are applied at the pharmacy, so you don’t have to pay up front and wait for the Danish Medicine Agency to cut you a check.

Reimbursable prescription medications purchased in other EU/EEA countries can count toward your CTR. If you’ve bought prescriptions abroad, fill out this form to be reimbursed based on the price of the medicine in Denmark.

What are the reimbursement thresholds for 2022 for adult patients?

If you’re over 18, you’ll have to pay out of pocket for your first 1,020 kroner of prescription medications.

Taken together, that means the most you can pay out of pocket for prescription medications in Denmark in 2022 is 4,320 kroner.

The Danish Medicines Agency provides a chart of the thresholds and an example patient’s yearly spending history and reimbursements here.

READ ALSO: Are you eligible for Danish national healthcare while your residence permit is processing?

What about reimbursements for children’s medications?

For patients under 18, all applicable prescriptions have a minimum 60 percent reimbursement rate. That gets bumped up to 75 percent after a CTR total of 1,705 kroner, 85 percent after 3,700 kroner, and 100 percent after 24,628 kroner.

Just like for adults, the maximum out-of-pocket costs for a child’s prescriptions in a year is 4,320 kroner.

What if I know I’ll need more than 20,000 kroner of medications?

If you have chronic conditions or a major health challenge and can tell at the beginning of the year that you’ll hit the CTR maximum, you can apply for an installment plan.

Pick the pharmacy most convenient for you and request an installment plan — you’ll be able to pay the maximum yearly copay of 4,320 kroner in 12 monthly installments of 360 kroner.

Generic versus name-brand drugs and reimbursement

Different drugs with the same active ingredients are called synonymous — generally, if your doctor prescribes a name-brand drug and there’s a less expensive synonymous drug, your pharmacist will give you the option to choose.

If you stick with the more expensive name-brand drug, you’re responsible for the cost difference and only the price of the generic drug will be added to your CTR total.

There are sometimes good reasons for choosing a more expensive synonymous drug — if, for instance, you’re allergic to some of the added ingredients in the generic form, your doctor can apply for increased reimbursement on your behalf.