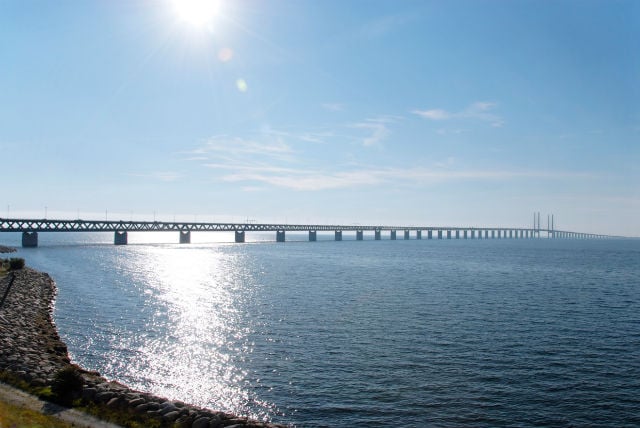 The Öresund Bridge is the longest bridge-tunnel in Europe. Photo: Silvia Man/Imagebank Sweden
The Öresund Consortium announced on Friday that Germany firm Muehlhan had won the 226m Swedish kronor (160m Danish kroner) contract for the first four years of the project.
The first phase will cover the southern side from the island of Pepparholm to the Swedish coast.
“There's 300,000 square metres of surface to paint, so it's huge actually,” John Alexander Sahlin, the consortium's press spokesman, told The Local. The steel structure beneath the motorway needs two new coats of paint. Photo: Johan Nilsson/TT
The Øresund Bridge is the longest combined road and rail bridge in Europe, with the bridge part running nearly eight kilometres (five miles) from the Swedish coast to the artificial island of Pepparholm in the middle of the Öresund Straits.
The span is completed by the four-kilometre Drogden Tunnel from to the Danish island of Amager, which is connected to Copenhagen.
Muehlhan contract will see it add two new layers of paint to the steel construction that runs under the motorway.
Sahlin said that because the bridge carries both road and rail traffic, the consortium had had to order special platforms which would allow the structure to be painted without putting workmen in danger of being hit by passing trains.
“Our bridge is like no other bridge in the world, so you need to have a special platform which can hang outside our bridge,” he said. “It's very special circumstances because the trains run very close to the platform and the motorway is above.”
The first of the platforms, which are being built in the Swedish cities of Kristianstad and Sölvesborg, will be delivered this summer.
The consortium plans to start on Pepper Island (Pepparholm/Peberholm) in October, painting the southern side up to the pylons in the middle over the next two years.
The work will then continue on the rest of the southern side over the following two years, before it moving on to the northern side in the years leading up to completion in 2032.
Even then the work will not be over.
“When we complete this project, it will be 13 years later, so the first part of the project will already be pretty old,” Sahlin explained.  “We are already preparing for the next project after this one, it's pretty much an ongoing project so long as the bridge is there.”
Sahlin said the contract was the biggest maintenance project on the bridge since it was completed in 1999.