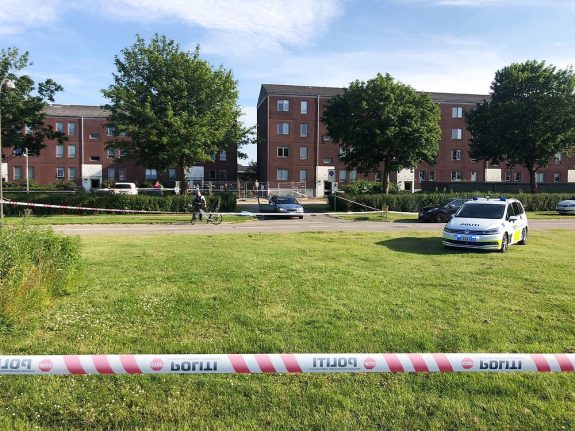 The scene of the shooting in Herlev in greater Copenhagen on Tuesday. Photo: Mathias Øgendal / Ritzau Scanpix

A dramatic operation involving armed officers outside an apartment building in the Bispehaven area in Aarhus, Denmark’s second city, led to a man being escorted to a preliminary hearing at Glostrup District Court, daily Ekstra Bladet reports.

Glostrup is close to Copenhagen and the location of the shooting, which took place on Tuesday. A 21-year-old and a 23-year-old, both from Sweden, were killed.

Police declined to comment on the arrest in Aarhus or confirm its connection to the shooting, however.

The preliminary hearing was conducted behind ‘double closed doors’, according to the newspaper’s reporter at the court.

That means no information relating to potential charges will be made public following the hearing.

But the Danish prosecution authority confirmed that step had been taken due to the case “relating to organised gang crime with connections abroad,” Ekstra Bladet writes.

A Swedish interpreter was present at the court.

Swedish daily Expressen has previously reported that the 23-year-old victim was a leading member of a gang known as ‘Snottaz’ from the Rinkeby neighbourhood in Stockholm. The other man was from Tensta, also near the Swedish capital, according to the newspaper.

Copenhagen West Police confirmed on Thursday that they were coordinating with Swedish law enforcement in the investigation of the crime.

The shooting took place on the Sennepshaven road in Herlev, around 12 kilometres northwest of central Copenhagen.

The victims' vehicle was hit by shots at least ten times and both pistols and automatic weapons were probably used, Ritzau reported earlier this week.