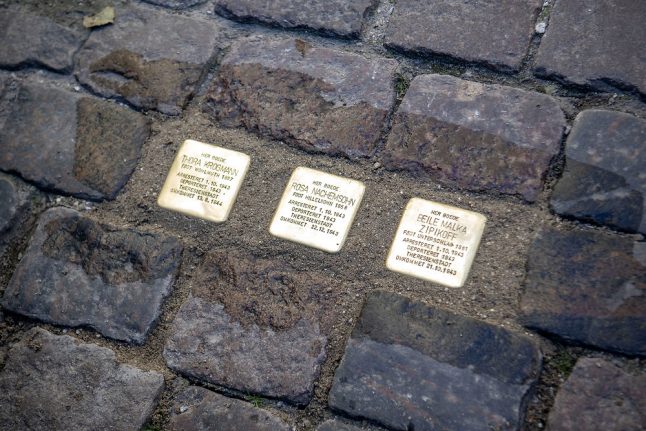 The 12 stones – known as Stolpersteine (literally, ‘stumbling stones’) in Germany – are placed across the city, including in neighbouring Frederiksberg.

The brass stones are part of a larger project in which the memorial markers are to be placed at locations where Nazism existed in Denmark, media including Berlingske and TV2 report.

The first three of the Danish stones were laid on Monday morning near the synagogue on Krystalgade in central Copenhagen, once the location of a Jewish home for the elderly.

According to the Danish Jewish Information Centre (Jødisk Informationscenter), the stones commemorate Danish or stateless Jews who were deported and in some cases killed in concentration camps.

In 1940, Denmark turned away stateless Jews who had come to the country as refugees, resulting in their deaths in Nazi concentration camps, and in 1943 began to deport Danish Jews under orders from the occupying Nazi forces.

Around 50 Danish Jews died in the Theresienstadt concentration camp in the modern-day Czech Republic, according to Berlingske.

In 2005, then-prime minister Anders Fogh Rasmussen officially apologized for Denmark’s treatment of foreign Jews, with particular reference to those who were handed over to German authorities during the Second World War.

“If you do not know your history or understand history, you are almost condemned to repeating it. It is of great significance and is important to identity to be willing to commemorate,” Henri Goldstein, leader of the Jewish Community in Denmark (Det Jødiske Samfund i Danmark), told Ritzau.

Denmark is the 26th country to get the memorial stones, according to Berlingske’s report.