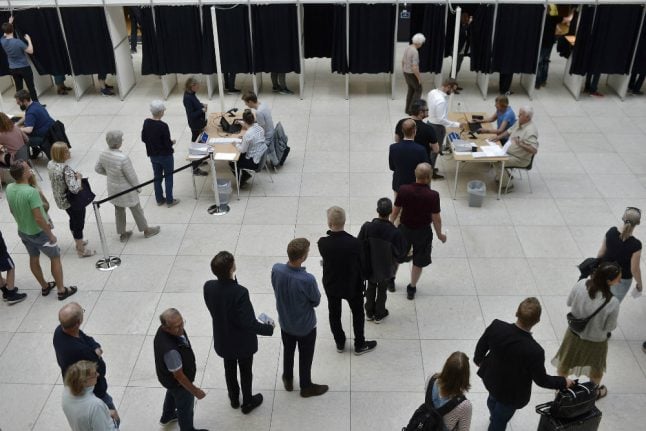 Opinion polls put the opposition centre-left Social Democrats, led by Mette Frederiksen, at 27.2 percent, a comfortable lead of almost 10 percentage points ahead of Prime Minister Lars Lokke Rasmussen's ruling Liberal Party, which has been in power for 14 of the last 18 years.

“Many voters want change. In particular, the 'millennials', who can vote for the first time,” Flemming Juul Christiansen, a political scientist at Roskilde University, told AFP.

Like Gustaf Lindegaard who is voting for the first time, 57 percent of Danes think the next government should prioritise climate change, according to a Gallup poll published in February. For those aged between 18 and 35, the figure was 69 percent.

“I really think global warming is the most important issue,” Lindegaard said.

**REMINDER: Join The Local from 8pm on Wednesday to follow the results of the Danish general election LIVE**

The Socialist People's Party, heavily focused on environmental issues, is also expected to see a surge in its numbers, with opinion polls suggesting it could take 8.3 percent of votes, almost double its 2015 score.

If the Social Democrats emerge victorious, they intend to form a minority government — common in Denmark's proportional representation system — relying on the support of the left or the right on a case-by-case basis to pass legislation.

As Denmark enjoys robust growth, almost full employment and strong public finances, the party has focused its campaign on climate issues and the defence of the welfare state, promising to reverse budget cuts to education and healthcare.

Analysts believe the Social Democrats would likely collaborate with the right on immigration and the left on other matters in the Scandinavian country, which is a member of the European Union but not the eurozone.

However, with a splintered political landscape featuring an abundance of political parties, the party could also find it necessary to forge long-term alliances to ensure stability.

While the Liberal Party is expected to lose its grip on power, its performance is projected to match that of the 2015 election.

On the eve of the election Prime Minister Lars Løkke Rasmussen announced a dramatic shift for the Liberals by declaring his priority was now to form a government with traditional rivals the Social Democrats. But opinion polls indicate the far-right Danish People's Party, which has informally supported Rasmussen's minority government, could lose almost half its support, shrinking to 10.7 percent.

For the last two decades the anti-immigrant party has supported successive right-wing governments in exchange for the implementation of their restrictive immigration policies.

But as those policies have now been broadly adopted by almost all Danish parties, the Danish People's Party has lost its unique appeal with voters.

The Social Democrats for instance last year announced their own proposal to crack down on immigration, including sending asylum seekers to North African camps while their requests are being processed.

“We stand by our firm and realistic policy when it comes to immigration. We believe that Denmark and other countries have a responsibility to help people in need but there is a limit to the numbers we can take in,” said Nicolai Wammen, political spokesman for the Social Democrats.

The Danish People's Party's slide has in part benefitted the Social Democrats, but it also coincides with the emergence of two more extreme far-right parties, New Right and the anti-Muslim Hard Line.

The Danish parliament, the Folketing, has 179 seats, four of which represent the autonomous territories of Greenland and the Faroe Islands, which have two seats each.

To be eligible for a seat, a party must win at least two percent of votes.

Voter turnout is traditionally high in Denmark. In 2015, 85.9 percent of voters cast their ballots.