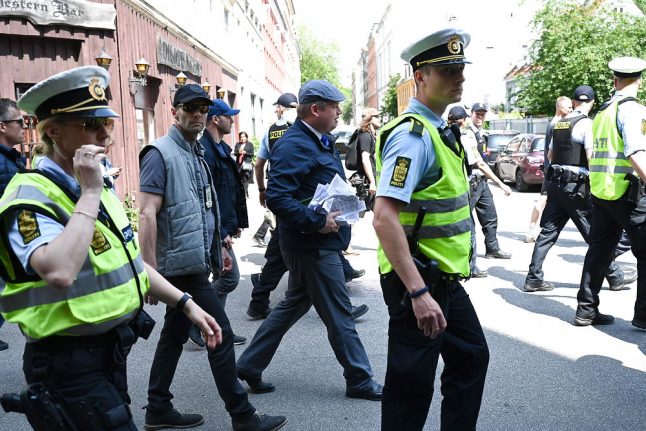 Of the three, only the Klaus Riskær Pedersen party looks to be doomed to failure, while two far-right parties, New Right and Stram Kurs, look to be in with a reasonable chance of gaining a small handful of seats each.

The latter party’s leader, Rasmus Paludan, has espoused vehemently anti-Islam rhetoric and has a criminal conviction (he has appealed) for inciting racial hatred. He is known, amongst other things, for burning and desecrating the Quran at demonstrations in areas with large minority ethnic populations.

Such action could have resulted in criminal charges in Denmark as recently as 2017, when the country abolished a long-standing blasphemy law. But Paludan could soon be voicing his views in parliament.

Meanwhile, an established party with a very low vote share and no current MPs, the Christian Democrats, also have cause for optimism about the election outcome.

So why are parties with marginal vote shares close to making it into parliament?

The short answer is: Because Denmark uses an electoral system of proportional representation to divvy out its 179 seats (normally referred to as mandates in Danish).

In the general election, Denmark is divided into 3 provinces (landsdele) and 10 greater constituencies (storkredse). These divisions are used to calculate how many MPs are elected in the various regions of the country.

The aim of this is to ensure fair geographical representation, with parliament reflecting local differences in party vote shares.

Although calculations are less than straightforward, the overall idea of Denmark’s system of proportional representation is to give, for example, a party that gains 10 percent of the votes 10 percent of the 179 seats in parliament.

This is where another important factor comes into play, however – the parliamentary threshold (spærregrænse).

Set at 2 percent, parties who receive a lower national share of the vote than this threshold do not qualify for parliamentary representation.

For those who just about reach it, their number of seats might look like a lot for what may seem like a fringe vote – but they have done enough to earn their slice of representation, according to the system of proportional representation.

A Voxmeter poll dated June 4th suggests that, while the Claus Riskær Pedersen party, polling at 0.4 percent, is going to fail to enter parliament, the two other new parties – Stram Kurs (1.6 percent) and New Right (1.8 percent) – have a realistic chance of hitting the threshold.

Stram Kurs and New Right have both polled at over 2 percent in previous polls, with New Right showing at 2.1 percent just a day ago and Stram Kurs at 2.6 percent late last month.

That means the contentious Paludan and a handful of others who subscribe to his views can take seats at Christiansborg after the election.

Meanwhile, the Christian Democrats have existed for decades but had seen their support almost vanish since the 1990s. They have made an unlikely comeback in recent weeks under charismatic stand-in leader Isabella Arendt.

According to the latest poll, the Christian Democrats, currently with 1.6 percent (they polled 0.8 percent in 2015) may fail to reach the magic 2 percent despite Arendt’s efforts. However, they could actually make it into parliament anyway.

That is because they could gain what is known in Danish as a kredsmandat (constituency seat) by receiving a very high number of votes in the same locality (the exact number varies between constituencies).

Christian Democrat candidate Kristian Andersen could achieve this in the West Jutland greater constituency, a heartland of the party, according to a projection reported by Altinget last week.

And there’s further good news for Arendt – scoring a local kredsmandat would mean her party also qualifies for its share of the other type of seat, the nationally-divided tillægsmandater (supplementary seats).

In other words, a high vote share in a single town or area can secure very small parties like the Christian Democrats a number of MPs reflecting their national vote share – even if that vote share is under the normal 2 percent threshold.

According to the Danish parliament’s website, the election threshold was introduced in 1953 in order to prevent too many small parties entering parliament, thereby complicating the legislative process.

But for the fringe parties in the 2019 general election, there appears to be cause for bullishness.

READ ALSO: What you should know about the parties on the fringes in the Danish general election