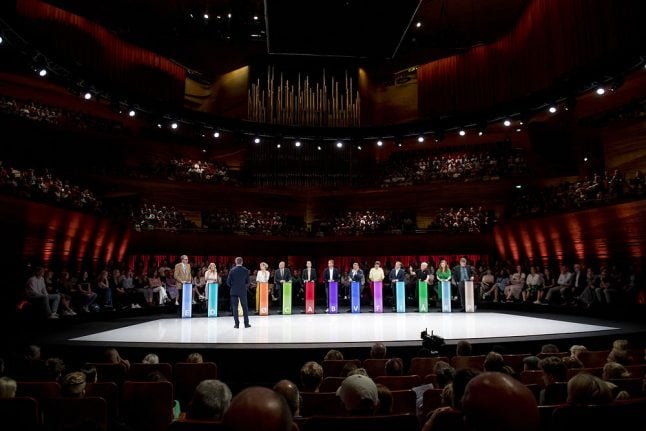 But now that tough rhetoric is widely adopted by the mainstream to the dismay of immigrants who say they feel stigmatised.

Ahead of Wednesday's general election, the woman who will likely become the next prime minister, Mette Frederiksen of the Social Democrats, has vowed to carry on the immigration policies pursued by outgoing Liberal Prime Minister Lars Løkke Rasmussen, whose minority government has been informally backed by the populist Danish People's Party.

“The Social Democrats realised that if they don't want to lose yet another election on the immigration question, they needed to emulate the policies of the Liberals and the Danish People's Party,” University of Roskilde political scientist Flemming Juul Christiansen told AFP.

Since 2001, the Danish People's Party has heavily influenced immigration and integration policy in the country of 5.6 million, where almost 10 percent of the population was born abroad.

The Local's 2019 general election guide to:

In return, the party has provided crucial, informal backing for the right-wing minority governments that have been in power for 14 of the past 18 years, during which time the far-right's ideology and terminology have come to be the norm.

“What we thought was extreme 10 years ago is now a common discourse in Denmark,” says Kasper Møller Hansen, political science professor at the University of Copenhagen.

In Denmark, long known for its progressive and liberal policies, all of the political parties — with the exception of the far left — are in agreement on keeping immigration numbers as low as possible.

With policies like no family reunification for partners under 24 years of age, the seizure of migrants' valuables, and doubled sentences for crimes committed in certain areas, the message has been unambiguous.

“We do not want Denmark to become a more multi-ethnic society,” Danish People's Party MP Hans Kristian Skibby said at a recent meeting with his constituents in the western town of Horsens, where nearly one in four people voted for the party in 2015.

In the first quarter of this year, 620 people applied for asylum in Denmark, the lowest number since 2008.

For foreigners and Danes of foreign origin, integration statistics are a mixed bag.

But while Denmark boasts almost full employment and is crying out for workers, 80 percent of ethnic Danes hold down a job, compared to just 56 percent for “non-Western” people — now the preferred term for many immigrants in Denmark.

In addition to the difficulty of learning the Danish language, author Jens Christian Grøndahl attributes this to a lack of unskilled jobs that could “absorb” some of the foreigners trying to break into the Danish labour market.

“The welfare state is not designed to dole out welfare cheques: it's a Protestant construction founded on every person's responsibility and participation,” he says.

With a model designed to create an egalitarian, classless society — and which crumbles with too few contributors and too many needy — Danes have been unflinching in their unwillingness to pay that social cost.

Despite five years of university studies in social sciences and being fluent in five languages, Julien Murhula, who came to Denmark as a refugee from Congo 16 years ago, has never found a stable job.

Like him, only 52 percent of immigrants in Denmark feel integrated, according to integration ministry statistics.

READ ALSO: What do foreigners in Denmark think about the general election?

In 2010, the government began publishing a yearly list of “ghettos” to describe disadvantaged neighbourhoods with a high immigrant population.

While the idea was to identify segregated areas and inject financial and human resources, PM Rasmussen last year said the government wanted to see an end to “parallel societies”, and there were “too many people of non-Western descent that don't take responsibility.”

Residents in those areas take offence to that kind of language, and say it doesn't help them feel welcome in society.

“I know a lot of foreigners who have been destroyed by the system,” says Murhula.

According to Ulf Hedetoft, a professor at the University of Copenhagen who specialises in political cultures, Danes “identify themselves as a homogenous group in opposition to 'others'.”

The debate over Islam's place in Denmark has also simmered since the controversial 2005 publication of the Prophet Mohammed cartoons in the Jyllands-Posten newspaper, which sparked violent protests in the Muslim world.

The Danish People's Party, once fringe, is now considered part of the political mainstream. It is expected to see its support almost halved on Wednesday — as in the recent European Parliament elections — losing votes to the Social Democrats, as well as newly formed far-right parties including libertarian New Right and the Islamophobic Stram Kurs (Hard Line), whose party leader has regularly organised burnings of the Koran on public squares.

READ ALSO: Will immigration take a back seat in the final days before Denmark's election?