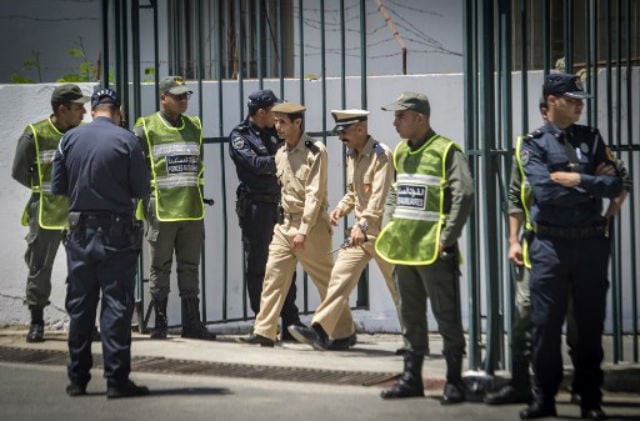 Members of the Moroccan security services stand guard during the trial of the three suspects on May 30th. Photo: Fadel Senna/AFP

The alleged leader of a jihadist cell accused of killing two Scandinavian hikers in Morocco admitted to the murders in court on Thursday, saying they were carried out in the name of the Isis group.

Danish student Louisa Vesterager Jespersen, 24, and 28-year-old Norwegian Maren Ueland had their throats slit while camping in an isolated area of the High Atlas mountains in December.

“I beheaded one of them… I regret it,” former street vendor Abdessamad Ejjoud, 25, told the court, accusing co-defendant Younes Ouaziyad of killing the other hiker.

“We loved Isis and we prayed to God for it,” he said, wearing a long white tunic.

Twenty-four defendants – facing charges including promoting terrorism, forming a terrorist cell and premeditated murder – appeared in the court in Sale, near Rabat, under heavy security.

Three main suspects, including Ejjoud, are accused of direct involvement in the killings.

In theory, the killers could face the death penalty, but Morocco has had a de facto freeze on executions since 1993.

Nature lovers Jespersen and Ueland shared an apartment and went to Norway's Bo University, where they were studying to be guides.

They had travelled together to Morocco for their Christmas holidays.

Their lives were ended in the foothills of Toubkal, the highest summit in North Africa, some 80 kilometres from the tourist hub of Marrakesh.

Ejjoud – who had previously been jailed for trying to join Isis in Syria – confessed to organizing the mission to the High Atlas mountains on December 12th during which the tourists were killed.

The prosecution has said several potential targets were passed over because the foreigners were accompanied by guides or local residents.

It was four days before the killers selected their targets, according to the prosecution. It said two of them carried out the killings while the third filmed them on a phone.

After the bodies were discovered, the Moroccan authorities were initially cautious, referring to a “criminal act” and wounds to the victims' necks.

But that changed when the video surfaced showing a victim being beheaded.

In it, one of the killers refers to “enemies of Allah” and says the murders are to avenge the killings of jihadists in Syria.

At the trial Ejjoud said he had “sent around” the footage to online groups of Isis supporters.

A separate video published in the initial aftermath of the murders showed the alleged killers pledging allegiance to Isis leader Abu Bakr al-Baghdadi.

The only foreigner among the defendants is Spanish-Swiss 25-year-old Kevin Zoller Guervos, who moved to Morocco after converting to Islam.

The others come from modest backgrounds, scraping by on odd jobs and living in neglected areas of Marrakesh, the North African kingdom's main tourist city.

Investigators said the “cell” was inspired by Isis ideology, but Morocco's anti-terror chief insisted the accused had no contact with the jihadist group in conflict zones.

Isis has never claimed responsibility for the murders.

Ejjoud said that after being prevented from going to Syria he “decided to carry out holy war” at home.

He said his group tried to make a bomb “but it did not work” and then plotted to “attack Christians as they are killing Muslims”.

At an earlier hearing, the court accepted a request by the Jespersen family's lawyer for the government to be held “morally responsible” for the killings so they could receive compensation.

The trial opened on May 2nd but was adjourned to May 16th and then paused again after a brief hearing.

The court on Thursday set the next hearing for June 13th.

CHILDREN
Denmark to consider repatriating children from Syrian camps by separating them from mothers
Url copied to clipboard!