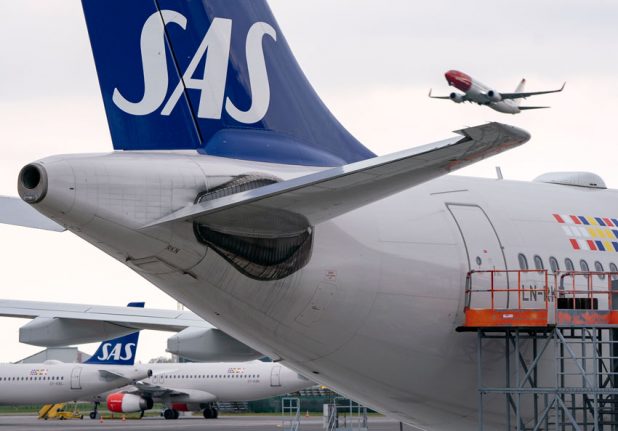 Photo: Johan Nilsson/TT
The strike affected roughly 380,000 passengers who had their plans disrupted by around 4,000 cancellations.
SAS second quarter results released on Tuesday revealed that the strike also had a significant impact on the airline’s finances. SAS posted a pre-tax loss of 1.2 billion kronor, a decrease of 728 million kronor over the same quarter last year.
ANALYSIS: What impact will the SAS strike have on the airline's future (and ticket prices)?
A statement from CEO Rickard Gustafson said the pilots’ strike was just one factor behind the airline’s poor quarter.
“The result was negatively impacted by the strike, increasing fuel price and a continued weakening of the Swedish krona,” Gustafson wrote in a statement.
Gustafson also pointed to “decreased demand for domestic travel, especially in Sweden”.
The pilots’ strike was driven by disagreements over salary increases, working hours and scheduling. Over 1,400 members of the SAS Pilots group in Sweden, Denmark and Norway walked off the job on April 26th and stayed away until an agreement was reached on May 2nd that reportedly included a 3.5 percent salary increase and more predictable work schedules for the striking pilots.
“The new three-year collective bargaining agreements with the pilot unions in Denmark, Norway and Sweden give us the stability and time to continue our transformation efforts,” Gustafson’s statement to investors said. “Although I would have preferred to avoid the disruption in our operations, I am pleased to see that proper planning, digital investments and engaged employees made a huge difference during the strike.”
Gustafson told Swedish media shortly after the pilots resumed work that the airline had no plans to plans to raise ticket prices to compensate for the losses during the strike. Some analysts have predicted that the airline might offer cheap tickets, especially for its loyal customers, as a way of regaining trust and tempting back dissatisfied passengers. But other analysts said that SAS is going to have to work hard to win back the trust of travellers affected by the strike.
“The airline has experienced a loss of confidence from their customers: 400 thousand travellers affected that are probably not particularly impressed by the situation,” aviation analyst Mats Hyttinge at Carlsquare told The Local earlier this month. “The airline will have to start to rebuild confidence among customers and may be a bit generous on claims from customers.”
READ ALSO: What are my rights if a flight is delayed or cancelled?