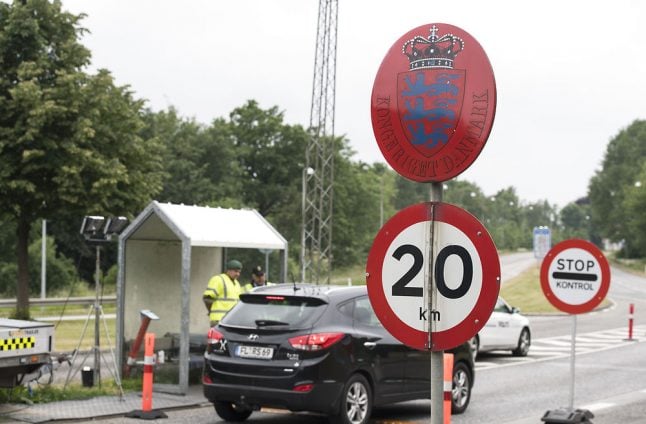 Denmark's temporary border controls have become a hot-button issue for both the general and European elections after Prime Minister Lars Løkke Rasmussen said they should be made permanent.

In place since early 2016, when they were implemented in response to the migrant and refugee crisis of late 2015, the checks on Denmark’s border with Germany have been extended several times, with exceptional circumstances cited as justification for keeping them in place.

Prime Minister Lars Løkke Rasmussen has now proposed that the rules of the Schengen Area, which abolish border and passport checks between the 26 participating members states, be changed to allow individual member states to decide whether to place checks on their frontiers.

The proposal has received the initial support of a number of Danish political parties, but the centre-left Social Liberal (Radikale Venstre) has placed itself as an opponent via its lead candidate for the upcoming EU elections, Morten Helveg Petersen.

The Liberals and Social Liberals belong to the ALDE (Alliance of Liberals and Democrats for Europe) grouping of parties in the Strasbourg parliament, despite their positions on opposite sides of the political aisle in Denmark.

Petersen called the proposal by Rasmussen a “play meant for the election campaign, not for reality”.

“Does (Rasmussen) really think that lorries and Danes going on holiday in Europe should wait in kilometre-long queues?”, Petersen said.

The MEP added that permanent Danish border control on the German frontier could “destroy” the European Single Market.

“That is what you are gambling with,” he said.

The European Single Market or Common Market is a single market which guarantees the free movement of the ‘four freedoms’ — goods, capital, services, and labour –– within the EU's 28 member states.

Morten Løkkegaard, who is lead candidate for the European elections with Rasmussen’s Liberal party, said that he believes Denmark has no choice but to continue with border control measures.

“Free movement is a fantastic thing which has earned us billions. But criminals, terrorists and people smugglers have also realised this, and we have to react,” Løkkegaard said.

“In the same way checks are conducted at airports and major events, we must also secure free movement of goods and law-abiding citizens whilst making life difficult for criminals,” he added.

But Petersen said other approaches must be taken to meet challenges presented by migration, cross-border crime and terror threats. These include tightening the EU’s external borders and Danish participation in Europol.

“Essentially, it is a waste of resources to control individual border crossings when you can freely cross over fields and (other) roads anyway,” he said.

“If police came and asked for permanent border control, I might look at things differently, but that is not the case,” he said.

The Social Liberal MEP also said he did not foresee support for Rasmussen’s suggestion in the European parliament.

“The Liberal party has not even succeeded in gaining a majority in support of this in the (ALDE) liberal group in the EU parliament,” he said.

The Danish government announced last month that it would bring in controls on the border, citing recent bomb explosions and gang violence.

The border checks will take place at all border crossings one or more times per week.

People travelling across the border will therefore need to carry the proper identification such as a passport or driving licence.

In a confirmation issued on Monday, Denmark’s National Police confirmed the border control was now effective and reaffirmed its intention of “preventing serious and organized crime from spreading”.

All travellers should be prepared to show identification, the police statement added.

Copenhagen and surrounding areas have been subjected to a series of explosions and gang-related shootings in recent months.

“We are targeting organized crime and it is a stated goal for normal travellers to be affected as little as possible by the border control. The frequency of checks will depend upon current status of investigations and local conditions and traffic flow,” National Police director Lene Frank said in the statement.

Border control will take place in the form of spot checks and periods in which police controls will be in place. This will apply to ferry crossings between Sweden and Rønne (Bornholm), Helsingør (Zealand), Frederikshavn and Grenaa (both Jutland); traffic as on the Øresund Bridge and on all rail connections between Sweden and Denmark, Franks confirmed.

Stockholm has meanwhile announced its own response to a recent spate of violent crime incidents including explosions and fatal shootings in Sweden.