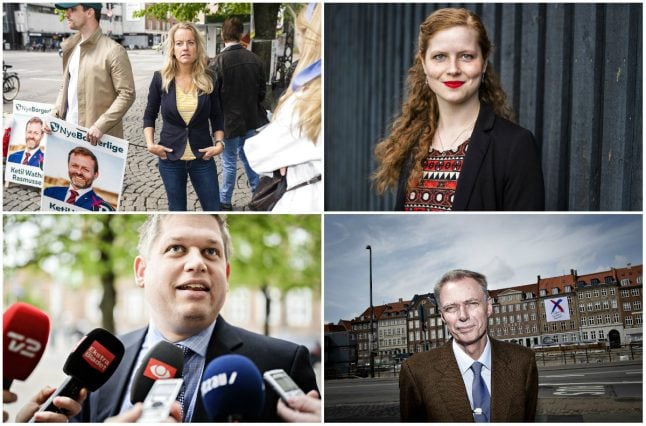 Stram Kurs leader Rasmus Paludan receiving the attention of Danish media. Photo: Philip Davali / Ritzau Scanpix
The most discussed person in Danish politics these days is Rasmus Paludan, an anti-Muslim rabble-rouser who has made a name for himself by holding anti-Islam demonstrations in areas with large minority communities. He uses these rallies to bash Muslims and desecrate the Quran in the hopes of provoking an angry response and then posts them to YouTube, where his attempts to portray himself as a victim rack up big view numbers. After one of his anti-Muslim demonstrations in Nørrebro led to a violent clash in April, the wall-to-wall media attention given to the agitator resulted in his party collecting enough signatures to qualify for the election.
Stram Kurs is a one-issue party, to put it mildly. Paludan and company want to forbid Islam in Denmark and to deport all non-Westerners who have been granted asylum. His comments about black South Africans resulted in a conviction on racism charges (he has appealed) and it has recently come to light that Paludan has been fined repeatedly for harassing a police officer and was the subject of a restraining order requested by a former fellow student at the University of Copenhagen. He has said a lot of other things that are clearly meant to provoke and there’s not much need to get into them here, as the Danish media has already given his extremist statements more than enough attention.
Denmark’s established centre-right parties have largely disavowed Stram Kurs, which says that it won’t support either Lars Løkke Rasmussen or Mette Frederiksen for prime minister. Paludan instead supports himself as PM, an extreme form of wishful thinking for someone who is polling at just above the two percent cut-off.
Nye Borgelige (English name: The New Right)
Leader: Pernille Vermund
Current representation in parliament: None
Expected result: 5 mandates (2.9 percent of the vote) New Right leader Pernille Vermund capaigning in Nørrebro, Copenhagen. Photo: Martin Sylvest / Ritzau Scanpix
One almost feels sorry for Pernille Vermund. When she launched Nye Borgelige in 2016, she promised a stricter immigration policy than that espoused by the established anti-immigration force, the Danish People’s Party (DF). She received an enormous amount of media attention, thanks in no small part to her ominous warnings of a looming “civil war” and the erosion of Danish values. But then along came Paludan to steal the affections of Danes who want a party that can out-DF DF, leaving Vermund somewhat in limbo.
Nye Borgelige combines its strict immigration policies with libertarianism and also wants Denmark to withdraw from the EU and international conventions. Unlike Stram Kurs, Nye Borgelige presents itself as a well-rounded party that takes a position on nearly every topic under the sun but the bottom line is that it is seen as an anti-immigration, anti-Islam party. While that might have sounded novel when the party launched in 2016, Nye Borgelige is now neck-and-neck with the newer, and more extreme, party that has since assumed that mantle.
Kristendemokraterne (English name: The Christian Democrats)
Leader: Stig Grenov (interim leader: Isabella Arendt)
Current representation in parliament: None
Expected result: 0.4 percent, not enough to make it to parliament Isabella Arendt and Stig Grenov of the Christian Democrats. Photo: Martin Sylvest / Ritzau Scanpix
One is also tempted to extend their sympathies to the Christian Democrats, who share nothing in common with the aforementioned parties except low poll numbers yet receive just a small fraction of the attention lavished on the others.
The Christian Democrats have been around since 1970 and were even part of a government coalition in the 1980s. In its early years, the party was a harsh critic of what it viewed as the moral decay of Danish society, but it has since toned down the rhetoric to focus more on issues concerning family life.
The Christian Democrats are the closest thing Denmark has to an anti-abortion party, although it stresses that it doesn’t want to ban abortions but rather work to bring numbers “down to zero” in part by making pregnant women go through obligatory consultations about the physical and mental consequences of ending their pregnancies.
The party’s mission of injecting “Christian values” into Danish society has been led since 2012 by Stig Grenov, but he announced this week that he is taking a leave of absence and will be replaced at the helm by Isabella Arendt, who had a breakout performance during the first round of televised party leader debates. That has seen the party's polling numbers receive a shot in the arm, although they are still some way from the 2 percent threshold required to enter parliament.
Klaus Riskær Pedersen
Leader: Klaus Riskær Pedersen
Current representation in parliament: None
Expected result: 0.2 percent, not enough to make it to parliament Klaus Riskær Pedersen in front of a large banner of his eponymous party's logo. Photo: Liselotte Sabroe / Ritzau Scanpix
Klaus Riskær Pedersen is a former businessman, European Parliament representative and prison inmate. He served 7.5 years in prison for fraud and is known for both making and losing large sums of money.
He established a new political party last year and named it after himself. Pedersen is positioning himself as a seasoned entrepreneur with political experience who learned from his mistakes. His primary focus is on taxes and he has said that if he gets elected into parliament he will lend his support to Lars Løkke Rasmussen.
* Expected results are based on a May 7 opinion poll by Epinion. With the poll taken nearly a full month before election day, these results are likely to change.