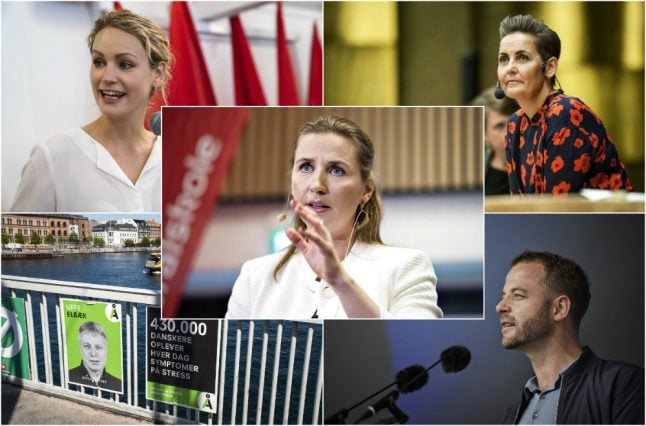 Composite: Ritzau Scanpix
With 13 – yes, 13 – parties vying for seats in the Danish parliament, it can be hard to maintain an overview of where the parties stand and where they fit within Denmark's traditional ‘bloc' style coalitions, if they even fit in at all.
In an attempt to provide readers with an introduction to the all the parties in a format that isn't too overwhelming, The Local has opted to break them into three groups: the current right-of-centre coalition and its support, the left-of-centre opposition parties, and the new and fringe parties attempting to find their way into Christiansborg when Danes take to the polls on June 5th.
READ ALSO: The 2019 Danish general election: What you should know about the parties on the right
In this round, we focus on the five left-of-centre parties that are currently in opposition: the Social Democrats, Red-Green Alliance, Social Liberals, The Alternative and the Socialist People's Party. Once largely united, the centre-left now looks irreversibly split over the hot-button issue of immigration, and climate change is also proving a sticking point.
Socialdemokratiet (English name: Social Democrats)
Leader: Mette Frederiksen
Current representation in parliament: 46 mandates (26.3 percent of the vote)
Expected result: 49 mandates (28.1 percent)* Mette Frederiksen. Photo: Henning Bagger / Ritzau Scanpix
The Social Democrats are the largest party in parliament and Mette Frederiksen is seen by most political commentators the person most likely to be Denmark’s next prime minister. For years the party has been the unofficial leader of Denmark’s so-called ‘red bloc’, but its relationship with the other centre-left parties has frayed in recent years, in no small part because the Social Democrats have moved far to the right on immigration.
Long viewed as Denmark’s worker’s party, the Social Democrats saw many of their traditional voters flee in the 2015 election, with the biggest beneficiary being the anti-immigration Danish People’s Party (DF). As a result, the party has moved ever closer to DF’s immigration policies and the party often crosses over to support the current centre-right coalition when it comes to immigration issues. This, in turn, has caused the Social Liberals (Radikale Venstre) to say they can no longer support Frederiksen as PM unless she changes her tune on immigration, something she has made clear she has no intention of doing.
The Social Democrats are on record as saying that if they once again emerge as the largest party in Denmark, they will form a go-it-alone government. Because Denmark has a negative parliamentary system, a government does not actually need a majority of MPs to support it but rather only needs to ensure that there is not a majority of MPs against it. Whether that scenario will actually arise remains to be seen. Despite the tough talk amongst former friends (and current frenemies?) on the left, it’s not out of the question that they will find common ground again.
While the immigration split is crucial to the Social Democrats’ standing, Frederiksen and company are not a one-issue party. She positions herself as “the children’s minister” and has also made early retirement for “worn-out” workers a key election theme.
Enhedslisten (The Red-Green Alliance)
Leader: Pernille Skipper
Current representation in parliament: 14 mandates (7.8 percent of the vote)
Expected result: 16 mandates (8.9 percent)* Pernille Skipper. Photo: Martin Sylvest / Ritzau Scanpix
First, a clarification. This left-wing party believes in collective leadership, so Skipper is not officially the party leader but is most certainly its political figurehead and most recognizable MP, especially now that Johanne Schmidt-Nielsen has announced that she is leaving politics.
The Red-Green Alliance (EL) is the furthest left of all of Denmark’s mainstream political parties and has its roots in the former Danish Communist Party and a number of socialist organizations. Although it has traditionally been seen as a protest party of sorts, the Red-Green Alliance has been growing in recent years. It picked up two mandates in the 2015 election and is forecast to gain two more this year.
The party’s primary issues are boosting the welfare state, fighting Denmark’s growing inequality, improving the nation’s treatment of refugees and asylum seekers and pushing for a new climate law. The Red-Green Alliance has for years supported holding a referendum on Denmark leaving the EU, but, citing the turmoil surrounding Brexit, the party backed off on that earlier this year, with Skipper saying the new goal is “changing the EU from within”.
Skipper has also somewhat backed away from her previous declaration that she herself would like to be prime minister. The EL lead spokesperson now says that she would pursue the post only if the election resulted in EL, the Alternative and the Socialist People’s Party claiming a parliamentary majority. If that fails to materialize, which seems very likely, EL would support Frederiksen.
Radikale Venstre (English name: Social Liberals)
Leader: Morten Østergaard
Current representation in parliament: 8 mandates (4.6 percent of the vote)
Expected result: 10 mandates (5.5 percent) Morten Østergaard. Photo: Niels Ahlmann Olesen / Ritzau Scanpix
Going back to the somewhat confusing nature of Danish political party names that we addressed in our first guide, the first thing to make clear is that the Social Liberals are not a radical leftist party, as a direct translation would suggest. Instead, they are a centrist party that served as a coalition party to the Social Democrats under former Prime Minister Helle Thorning-Schmidt, but have also been known to align with the blue bloc, particularly on issues of the economy.
Ahead of this year’s election, Østergaard has made it clear that his party will not support Frederiksen as PM unless she changes course on immigration (she says she won’t). The Social Liberals are running on the premise that this is a defining election rather than just a choice between Frederiksen and Lars Løkke Rasmussen as PM, but when the votes are tallied that may be the precise choice the party has to make since. As opinion polls currently stand, the Social Liberals will be in no position to form an alternative.
Alternativet (The Alternative)
Leader: Uffe Elbæk
Current representation in parliament: 9 mandates (4.8 percent of the vote)
Expected result: 7 mandates (4.3 percent) Uffe Elbæk. Photo: Liselotte Sabroe / Ritzau Scanpix
Once again, we’ll have to start with a clarification. Unlike the other parties here, which have pledged at least conditional support for Frederiksen as PM, Alternative leader Uffe Elbæk announced last summer that he is running as a candidate for prime minister, and that “no matter what”, his party would not support the Social Democrat leader.
Elbæk and The Alternative are running on putting the climate crisis front and centre. The party proposes spending 80 billion kroner on a ‘green transition’ and wants Denmark to take a leading role in leading the international response to the climate crisis. The Alternative has suggested putting a carbon tax on meat and air travel and wants to ensure that 20 percent of Denmark is converted to wild nature reserve. The party also supports a 30-hour working week.
Socialistisk Folkeparti (English name: The Socialist People’s Party)
Leader: Pia Olsen Dyhr
Current representation in parliament: 7 mandates (4.2 percent of the vote)
Expected result: 12 mandates (7.0 percent) Pia Olsen Dyhr. Photo: Martin Sylvest / Ritzau Scanpix
If current opinion polls are any indication, it looks like SF’s supporters may have finally forgiven the party for its ill-fated time as a support party to the Thorning-Schmidt government, which resulted in SF leaving the coalition after an internal revolt over the decision to sell a portion of Denmark’s shares in national energy giant Dong (now Ørsted) to Goldman Sachs.
SF lost a whopping nine mandates in the 2015 election, leaving it with only seven and making it the least popular of the left-wing parties. Led by Olsen Dyhr, it is now beginning to claw back support by focusing on inequality, welfare, education reforms and the environment.
* Expected results are based on a May 7 opinion poll by Epinion. With the poll taken nearly a full month before election day, these results are likely to change.