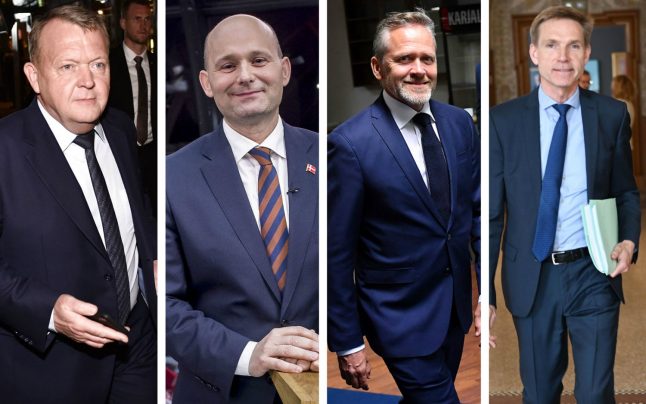 L-R: Lars Løkke Rasmussen, Søren Pape Poulsen, Anders Samuelsen, Kristian Thulesen Dahl. Photos: Ritzau Scanpix
In an attempt to provide readers with an introduction to the all the parties in a format that isn’t too overwhelming, The Local has opted to break them into three groups: the current right-of-centre coalition and its support, the left-of-centre opposition parties, and the new and fringe parties attempting to find their way into Christiansborg when Danes take to the polls on June 5th.
First up are the three centre-right ruling coalition partners – Venstre, the Conservatives and Liberal Alliance – and their vital right-wing supporters, the Danish People’s Party.
Venstre (English name: The Liberals)
Leader: Lars Løkke Rasmussen, Denmark’s prime minister
Current representation in parliament: 34 mandates (19 percent of the vote)
Expected result: 31 mandates (17.5 percent)* Lars Løkke Rasmussen handing out snacks and flyers to voters in Copenhagen. Photo: Mads Claus Rasmussen / Ritzau Scanpix
Danish political party names can be rather confusing. Ruling party Venstre, for example, directly translates as ‘Left’ but the party is actually to the right on the traditional left/right political scale. Then there’s its English name, which has quite different connotations depending on which side of the Atlantic you’re on. While Americans associated the word ‘liberal’ with left-wing progressive politics, in Denmark it is associated more with the ideals of individual freedom.
With that out of the way, what do The Liberals stand for? The party is primarily banking on positioning Rasmussen, who has been the nation’s PM for nearly seven of the past ten years, as “a steady hand in an uncertain time.” Somewhat surprisingly, Rasmussen announced this week that the party will also be running on what he’s calling a “welfare boost” that would increase welfare spending by 69 billion kroner through 2025. This stands in sharp contrast to the party’s 2015 election mantra of freezing public spending and is being panned by critics as a last-ditch attempt to roll back welfare cuts of his own making.
The Liberals’ Inger Støjberg has also been the public face of Denmark’s increasingly tough immigration stance, highlighted by a running tally on the Immigration Ministry website that proudly proclaims the government’s 114 changes in immigration policies. The Liberal’s immigration policies made plenty of international news during Ramussen’s current reign, particularly the much-discussed – but largely symbolic – ‘jewellery law’ and Støjberg’s penchant for celebrating making immigrants’ lives harder by eating cake. But with the emergence of two fringe and rabidly anti-immigration parties (more on them later), The Liberals look almost compassionate in comparison.
READ ALSO: Danish general election will demonstrate shift to right, but could be end for Rasmussen
Det Konservative Folkeparti (English name: The Conservative People’s Party)
Leader: Søren Pape Poulsen, Denmark’s justice minister
Current representation in parliament: 6 mandates (3 percent of the vote)
Expected result: 9 mandates (5 percent)* Conservative leader Søren Pape Poulsen, shown speaking with the Red-Green Alliance's Pernille Skipper. Photo: Mads Claus Rasmussen / Ritzau Scanpix
The Conservatives are part of Denmark’s current three-party, right-of-centre coalition along with The Liberals and Liberal Alliance. Poulsen and company would like to position themselves as the nation’s ‘tough on crime’ party and supports tougher crime penalties and increasing the number of police officers on the streets. Cynics might be tempted to point out that if so many police resources weren’t committed to the Conservative-backed border control or repeated but fruitless raids on the cannabis market in Christiania, this wouldn’t be an issue. In all fairness though, Danish police have been saying for years now that officers are stretched so thin that they are unable to carry out basic police work.
Economically, the party is in favour of lowering income and homeowners taxes, cutting the nation’s astronomical vehicle registration tax for gasoline and diesel cars and scrapping it entirely for hybrids and electrics. The party thinks of itself as the most environmentally-focused member of the right-of-centre bloc and has promised to initiate a ‘climate law’ (although not the citizen-backed one that failed to move through parliament) that includes a number of green initiatives like binding targets for CO2 emission reductions.
Liberal Alliance
Leader: Anders Samuelsen, Denmark’s foreign minister
Current representation in parliament: 13 mandates (7.5 percent of the vote)
Expected result: 6 mandates (3.6 percent)* Liberal Alliance leader Anders Samuelsen at a Foreign Ministry press conference. Photo: Mads Claus Rasmussen/Scanpix
As things stand now, Denmark’s libertarian party risks losing half of its seats in parliament. LA’s claim to fame is being a pro-business party that would like to see Denmark’s large public sector shrink significantly. Enthusiastic proponents of the free market, LA also thinks Danish taxes are way too high. Party leader Samuelsen famously threatened to topple the government if he couldn’t push through a decrease on topskat, a 15 percent tax paid by those who earn over 459,200 kroner ($69,000, €61,700) per year on top of other income taxes. He never got his wish but he failed to follow through on his threats, a loss of credibility that may have caused the party’s backing to plummet. Taxes are still front and centre of the party’s priorities, as LA would like to see the vehicle registration tax and the inheritance tax scrapped along with topskat.
Dansk Folkeparti (English name: Danish People’s Party)
Leader: Kristian Thulesen Dahl
Current representation in parliament: 37 mandates (21.1 percent of the vote)
Expected result: 25 mandates (13.9 percent of the vote)* DF's Kristian Thulesen Dahl campaigning in the Copenhagen suburb of Taastrup. Photo: Nils Meilvang / Ritzau Scanpix
Since its inception in 1995, the Danish People’s Party’s trademark has been its staunch opposition to immigration. It’s hard to overstate just how well this has worked for DF, both in terms of shifting the Overton window towards a much harsher public discourse on immigration and Islam, and in pushing the nation towards much stricter immigration legislation.
DF was the big winner in the 2015 election, nearly doubling its mandates and becoming Denmark's second largest party and the biggest one in the right-wing bloc — even bigger than Venstre. Perhaps the party’s greatest accomplishment has been getting the nation’s established parties, including the traditionally left-wing Social Democrats, to march in lockstep with DF’s rhetoric and policymaking. A prime example of this is the ‘paradigm shift’ passed earlier this year, in which Denmark’s refugee and asylum policy will now focus on sending refugees to their home countries rather than integrating them into Danish society.
Ironically, DF’s very success may have set it up for a fall. Not only did the party face charges of running from responsibility by declining to join a coalition government, its nearly 25-year campaign against immigration created an opportunity for parties like The New Right (Nye Borgerlige) and Stram Kurs to try to one-up the party. The Danish People’s Party must now fight off parties invading its turf from both the right and left.
* Expected results are based on a May 7 opinion poll by Epinion. With the poll taken nearly a full month before election day, these results are likely to change.