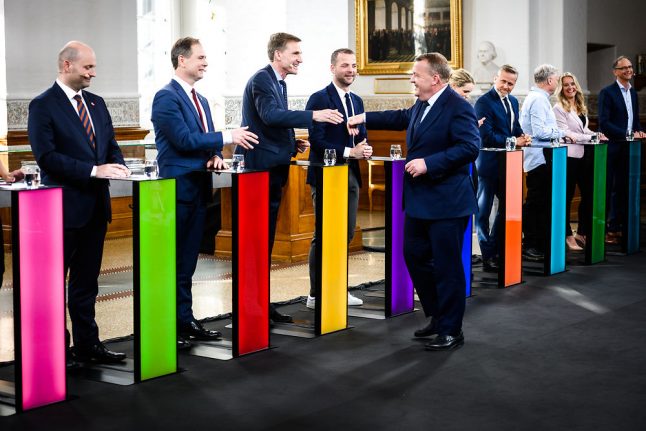 With almost a full calendar month until then, the general election campaigning season is set to be long – but parties wasted no time in getting started.

At 1:15pm, Rasmussen requested permission to speak to MPs assembled in parliament. He thereby announced the election would be held on June 5th.

The nine parties already represented in parliament will compete in the election, as will the Christian Democrats, a minor party which failed to reach the threshold to enter parliament at the last election.

Stram Kurs and its leader Rasmus Paludan, an Islamophobic provocateur with a criminal conviction for inciting racial hatred, are particularly controversial. The party advocates a form of ethnic cleansing through the deportation of thousands of Danes with foreign heritage, and wants to ban Islam entirely.

The New Right, which promotes libertarian economic policies, is also vehemently anti-Islam and has called for even tighter immigration rules than those propagated by the established right-wing nationalist party, the Danish People’s Party.

The presence of the new parties could result in a shift in discourse and campaigning around the election towards immigration and away from other areas thought to be high on Danes’ agendas, such as climate, healthcare and pensions.

Meanwhile, Mette Frederiksen, the leader of the Social Democrat party who hopes to become prime minister after the election, was unable to campaign after being hospitalized since Saturday with a stomach complaint.

Frederiksen was replaced by the party’s political spokesperson, Nicolai Wammen, in the first of the televised debates between party leaders, which was broadcast on Tuesday evening.

35 current MPs will not be running for re-election. These include Johanne Schmidt-Nielsen, a former lead spokesperson with the Red-Green Alliance (Enhedslisten) party, who is prevented from running by her own party’s rotation rules and has taken a job as secretary general with Save the Children Denmark. Liberal Alliance’s Thyra Frank, the current minister for the elderly, has decided to retire from politics; Frank is not currently an MP but did serve as one from 2011-15.

The ‘red bloc’ group of left-wing and centre-left parties – the Social Democrats, Social Liberal (Radikale Venstre), Socialist People’s Party and Red-Green Alliance – currently have a clear lead in polls, with 54.2 points according to Ritzau Index.

The conservative ‘blue bloc’ – Rasmussen’s Liberals along with the Conservatives, Liberal Alliance and Danish People’s Party – are at 44.5 percent according to the same poll. Such a split would give 78 of parliament’s 179 seats to Rasmussen’s group, and a majority 97 to the current opposition.

READ ALSO: Analysis: Danish general election will demonstrate shift to right, but could be end for Rasmussen