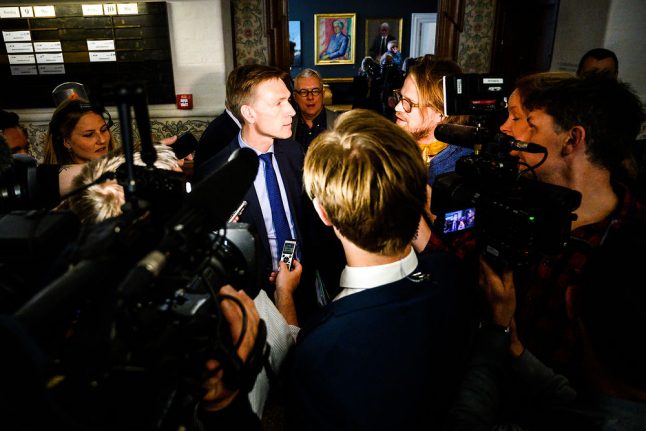 With almost a full calendar month until then, the general election campaigning season is set to be long by Danish standards.

High profile MPs from a number of parties took to the streets in Copenhagen within hours of Rasmussen’s announcement, including Minister of Finance Kristian Jensen, who handed out flyers at Nørreport Station. Søren Pape Poulsen, leader of the Conservatives and justice minister in the current coalition government, said he expected a hectic election campaign.

“We now have to discuss what the parties want. I believe it will be full speed ahead with 13 parties that have an opinion on everything, so I’m sure it will be good,” Poulsen said to Ritzau.

In referring to 13 parties, rather than the nine currently represented in parliament, Poulsen recognised the participation of the tiny Christian Democrats and three new fringe parties: the Klaus Riskær party, the New Right (Nye Borgerlige) and the Stram Kurs (Hard Line) party.

The latter of those parties, an extremist Islamophobic group which recently hit headlines through provocative demonstrations in areas with sizeable minority ethnic communities, wants to forbid Islam in Denmark and to deport non-Western people from the country.

Its leader, Rasmus Paludan, has a criminal conviction for inciting racial hatred and has been blocked by Facebook.

The party was recently approved for approval in the general election after gaining letters of support from 20,000 voters and is likely to be a prominent feature of campaigning season.

Conservative leader Poulsen said he wanted the election to focus on public spending and businesses.

“People are waiting in line to spend money [in parliament],” he said.

“Very few people mention that the reason we have good jobs in this country is that we have companies which are able to earn money for Denmark. I hope that will be a part of what this election is fought on,” he said.

Uffe Elbæk, political leader with the environmentalist Alternative party, said he wanted the climate and environment to “overshadow everything” in the election.

“We want a green election campaign and we want a green bloc. Will that gain a complete breakthrough in this election? No, probably not, but we will stand by it completely,” Elbæk said to Ritzau.

The Alternative party has broken with Denmark’s traditional left- and right-wing “bloc” system of parliamentary alliances by naming Elbæk as its preferred prime ministerial candidate, rather than Mette Frederiksen, leader of the Social Democrats.

The Social Democrat party, which has taken an increasingly hardline approach to immigration since losing the 2015 election, has recently focused on pensions as it braced itself for elections.

The party wants to make it easier for people with work-related chronic injuries to take early retirement.

Leader Mette Frederiksen wrote on social media this week that she had been temporarily hospitalized, but that she would be ready for the campaign.

“I am unfortunately still not very well,” Frederiksen wrote on Facebook, adding she was suffering with a “bad stomach ache” as well as dehydration.

“I’ll be ready the second I’m on my feet again. And I’m looking forward to discussing pensions,” she wrote prior to Rasmussen’s announcement. The left-wing Red-Green Alliance, a traditional ally of the Social Democrats, wants Frederiksen to prove her worth as a prime ministerial candidate, its lead spokesperson Pernille Skipper said.

“It’s important for us to say that we are not participating in this election to just make Mette Frederiksen prime minister. We want more welfare, conversion to green energy and better integration [of immigrants and refugees, ed.], where we treat each other decently,” Skipper told Ritzau.

“We want something that’s better than Lars Løkke (Rasmussen),” she added.

The Red-Green Alliance leader also made specific reference to Sjælsmark, a controversial accommodation centre for rejected asylum seekers, in her comments.

“It’s unbearable that there are children (at Sjælsmark) who are growing up with such an uncertain future in such intolerable conditions,” she said.

READ ALSO: Asylum families will not be allowed to make own meals at Danish deportation centre: minister

Anders Samuelsen, leader of coalition party Liberal Alliance and currently foreign minister, called for voters to keep their “heads cold and hearts warm” as they made their election choices.

“Our message in the election will be positive liberalism with rational, well-thought-through plans, which will give us greater togetherness in Denmark,” Samuelsen said.

“There are forces trying to split us and talk us into division. That is Rasmus Paludan, it’s also violent leftists, and it’s also Islamists,” the libertarian party leader said.

“I hope that we as politicians don’t fall into that trap and I therefore hope for an election in which we each present our politics in a sober fashion,” he added.

On Twitter, Social Liberal leader Morten Østergaard wrote that the election was taking place at a time when “fundamental rights are being challenged and values are on fire sale”.

“Let’s set a new course towards a greener, freer and stronger Denmark,” he added.

“The focus will be on whether we should keep a hard line on foreigners and spend the money on welfare, or whether immigration policies should be made more lenient again,” Dahl told Ritzau.

The DF leader has previously suggested the Social Democrats may not stick to their current policies on immigration – which are similar to those of DF – should the centre-left party take power after the election.