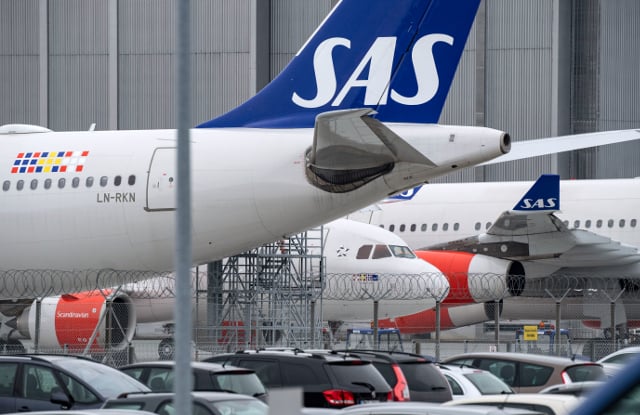 Both the airline and the SAS Pilots Group which represented the striking pilots have said they are satisfied with the deal reached to end the strike.

This reportedly included a 3.5 percent pay rise for pilots, as well as more predictable working schedules. On the one hand, this increase is not too far removed from the 2.3 percent initially proposed by SAS, but the more rigid schedules could make planning harder, and therefore more costly, for the airline.

Meanwhile, the week-long strike has had a negative impact not only on the company's finances, but also on customers' trust. Loss of money in the short-term

Denmark's Sydbank has estimated the total cost of the strike at between 60 and 80 million kronor per day, an assessment shared by aviation analyst Mats Hyttinge at Carlsquare, who told The Local the economic cost could total 500 million kronor for the full seven days.

Hyttinge emphasized that since the precise details of the deal between the airline and pilots' union haven't been made public, it's unclear exactly what costs are involved in the deal, and said SAS had bigger worries in the form of the weak Swedish krona, for example.

“The deal at face value does not present any dramatic cost increases [but] we don't have the full picture,” said Hyttinge.

“The weak Swedish krona and high oil prices are more worrying in the short perspective. Long term, the industry is growing but most European airlines struggle with high cost levels and stiff competition and they must all continue to be more effective and continue to cut costs,” he added. A figure that is more difficult to quantify is how much the strike will cost the airline in terms of compensation and loss of trust, which could lead to customers choosing competitor airlines.

“The airline has experienced a loss of confidence from their customers: 400 thousand travellers affected that are probably not particularly impressed by the situation,” Hyttinge explained.

“The airline will have to start to rebuild confidence among customers and may be be a bit generous on claims from customers.”

SAS CEO Rickard Gustafson said on Swedish TV that there were no plans to raise ticket prices to compensate for the losses during the strike. And some analysts have even predicted that the airline might offer cheap tickets, especially for its loyal customers, as a way of regaining trust and tempting back dissatisfied passengers.

“What SAS is likely to do when the strike is over is to try to sweeten the market, both in the form of cheap tickets and good offers to its Eurobonus customers,” flight analyst Hans Jörgen Elnæs told Norwegian financial newspaper E24.

This could have the knock-on effect of forcing competitors such as Norwegian to lower their own prices, leading to “many cheap tickets”, according to Jörgen Elnæs.

Several of the passengers directly affected by the strike told The Local they would avoid using the airline again, a sentiment many travellers shared on social media. But airlines do not typically see long-term reduction in bookings following a strike.

“People basically forget extremely quickly. I think [the strike] has little effect on consumer choice of airline tickets, but if there is another SAS strike soon from another occupational group, this will be remembered,” commented Norwegian School of Economics professor and aviation economics expert Frode Steen, speaking to E24.

A key consumer group for SAS is business travellers, responsible for around 70 percent of all flights with the airline, and it's therefore likely that the company will focus on retaining loyalty among this segment.

Never flying @SAS again. Canceled flights and no available flights for 3 days??? Forced to cancel and pay double through another airline. Thanks.

The other big question about the strike's impact is how much it will cost the airline in compensation costs — and whether it will even offer to pay these at all. SAS said during the conflict that it would reject applications for compensation, but EU law means that most passengers are nonetheless entitled to compensation unless the strike is judged to be an “extraordinary event”.

“SAS is usually one of the airlines that puts focus on customer satisfaction and fair treatment, so it has been a bit surprising to see them take this stance. From our perspective, things are pretty clear,” said Andreas Hermansson from AirHelp, which assists passengers with compensation claims. He told The Local his company had seen an increase in requests for help from passengers, and advised any affected passengers to submit a claim.

“Due to an ECJ decision from April last year, airline staff strikes are considered within the airline's control. This means any passenger that experienced a delay to their final destination, longer then three hours, on top of rebookings, rescheduling, food and accommodation also should be entitled to compensation in accordance to EC261, so up to 600 euros per person, depending on the flight route distance,” Hermansson said.

AirHelp is one of several companies which fill out the application for compensation on behalf of affected passengers in return for a fee. It's also possible for passengers to make claims individually, by filling out forms via the airline's website or using this form, which is valid in all EU countries plus Norway, Iceland and Switzerland.

In Sweden, passengers can seek free help from the Swedish Consumer Agency or European Consumer Centre, and if they aren't satisfied with the response or do not receive one, they can contact the National Board for Consumer Disputes (ARN).

READ ALSO: What are my rights if a flight is delayed or cancelled?