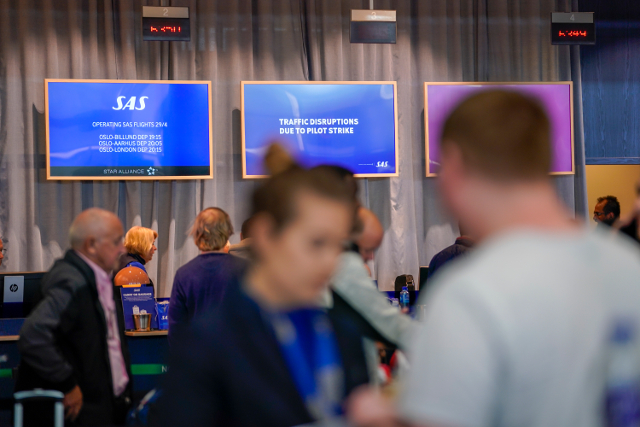 Norwegian public broadcaster NRK reports that the parties have reached a compromise, after 28 hours of marathon negotiations between Scandinavian Airlines, the pilots' unions and official mediators in Norway.

“We have been told that there is agreement, and that only formalities remain,” a striking SAS employee at Oslo's Gardermoen Airport told NRK.

When The Local contacted the Swedish pilots' union on Thursday at 4pm a press officer told us that “we cannot comment”. Union representatives have spoken to media on several occasions during the strike, so a non-comment could potentially indicate that the parties have reached the final stretch of negotiations.

“I haven't heard anything. But that's probably a good sign. That means they are in the process of negotiating,” Jan Sjölin, who have mediated in the conflict in Sweden, told Swedish news agency TT when asked if he had received any news from his Norwegian counterparts.

SAS CEO Rickard Gustafson was set to speak to reporters at the company's Stockholm headquarters at 8.45pm on Thursday, SAS announced later. But at 10pm the press conference had yet to start.

IN NUMBERS: The impact of the SAS pilot strike (so far)

The strike, which has affected more than 380,000 passengers, began when around 1,400 pilots in Denmark, Norway and Sweden walked out last Friday, after negotiations with their employer broke down.

According to SAS, who had refused to offer more than a 2.3 percent pay rise, the pilots were asking for what would effectively amount to a raise of 13 percent. But the pilots said that the key issues were in fact working hours and scheduling, complaining they sometimes have to work as many as seven weekends in a row.