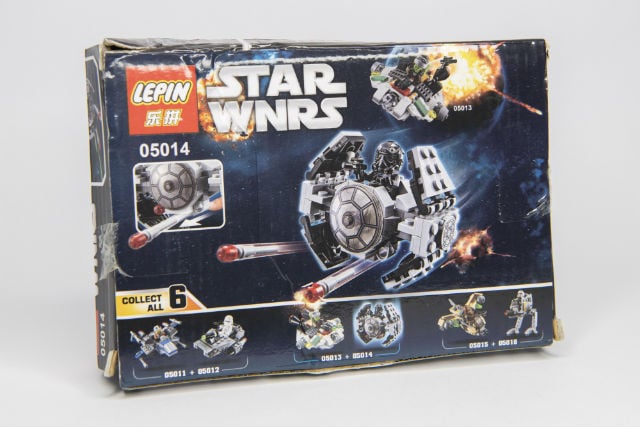 A Star Wnrs set made by Lepin. Photo: Fred Dufour/AFP
Police earlier this week raided the premises of Lepin — a Chinese toymaker manufacturing Lego knockoffs in the southern city of Shenzhen — arresting four people, Shanghai police said on Friday.
“In October 2018, the Shanghai police found that Lepin building blocks available on the market were extremely similar to that of Lego,” the statement said.
The toys were copied from Lego blueprints and sent to a factory in Shenzhen to be manufactured before they were sold all over China.
“Across more than 10 assembly lines, over 90 moulds had been produced… (police seized) some 630,000 completed pieces worth more than 200 million yuan ($30 million),” the statement said.
READ ALSO:
Images from the Tuesday raid — posted on official law enforcement social media accounts — showed moulds and boxes that looked remarkably similar to lines produced by the Danish toy giant.
A Star Wars knock-off is called “Star Plan”, while sets released in conjunction with the new “Lego Movie 2” have also been copied and sold under the name “The Lepin Bricks 2”.
The counterfeit products could be a safety concern for consumers, said Lego's China and Asia Pacific vice president Robin Smith, the official Xinhua news agency reported.
Foreign companies have long complained about lax intellectual property enforcement in China where counterfeiting is rampant.
In an attempt to end its trade war with Washington, Beijing has pledged to clamp down on intellectual property infringements.
The knockoffs are popular in a price-conscious market: a small city-themed Lepin set retails for $3 a box, whereas similar Lego sets start at $15.
A check by AFP showed that the imitation sets were still available on e-commerce platform Taobao on Saturday afternoon.
The Danish toy giant in February opened its first flagship store in Beijing — which features replicas of the Forbidden City made of plastic bricks — and has two other shops in Shanghai.
Lego has in recent years seen a renewed popularity thanks to premium collectors' editions and a movie tie-up.