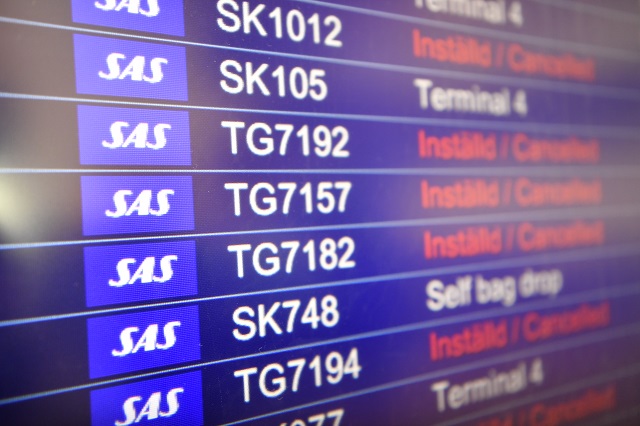 A total of 670 flights were cancelled on Friday, affecting 72,000 passengers' travel plans, SAS said. By Friday afternoon, the cancellations announced for Saturday were set to affect 34,000 more people.

Around 70 percent of all SAS flights are affected during the strike, meaning most domestic flights have been cancelled, as well as many European and long-haul flights. More than 1,400 pilots walked out on Friday, according to the SAS Pilot Group, including 372 in Denmark, 545 in Norway and 492 in Sweden.

SAS has offered passengers travelling on Friday, Saturday, Sunday or Monday the chance to re-book their flights for free.

READ ALSO: What to do if you're affected by the SAS strike

The strike comes after unsuccessful negotiations on a collective bargaining agreement between the pilot group and the airline. The disagreements are related to salary increases, working hours and scheduling.

“It is deeply regrettable that the pilot strike will have a negative impact on our customers. SAS is prepared to continue to negotiate, but if the requirements were to be met, they would have very negative consequences for the company,” said Karin Nyman, director of communications at SAS, in a statement on Friday.

But pilots insisted their demands were reasonable.

“They're demonizing us and that makes the process more difficult. Almost one in four SAS flights is flown by subcontractors and we want to know what our future looks like,” Wilhelm Tersmeden, chairman of the Swedish pilot association's SAS branch, told Swedish news agency TT on Friday morning.

READ ALSO: 'It feels like we've been abandoned': outrage as hundreds of SAS flights cancelled

The strike could hit the airline's finances hard, with Denmark's Sydbank estimating that if it continued for 14 days, the estimated 60-80 million kronor daily cost would negate the entire estimated annual surplus.

Scandinavian media have reported that the pilots' requests included a 13 percent salary increase, something Sydbank analyst Jacob Pedersen said would be tough for the company to offer.

“If SAS cannot understand how to streamline [costs] and save, the company will within a few quarters go from profitability to loss,” he said, describing its current profitability level as “paper thin”.

In the meantime, talks have stalled between the parties, according to Rawaz Nermany, chairman of the Swedish pilot association. Nermany said the SAS Pilot Group was waiting for the employer to contact them.

“It is of course a very difficult situation we are in. Now both parties can scrutinize themselves and try to find a new way forward,” he said.

Keep an eye on www.thelocal.se for more updates. Are you affected by the strike? Email [email protected]