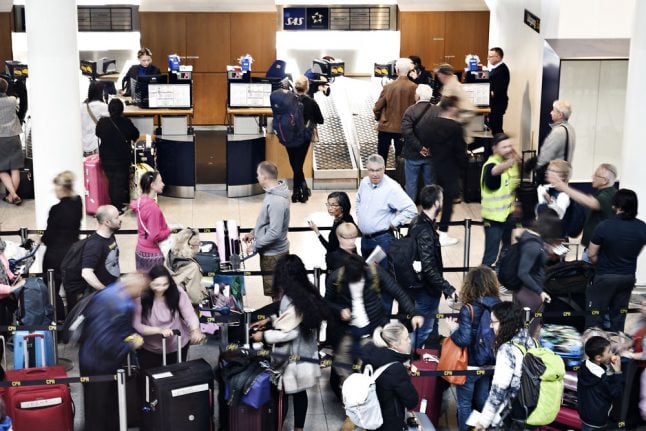 A total of 170,000 passengers are expected to be affected this weekend after SAS pilots walked off the job in Sweden, Denmark and Norway early on Friday, initially stranding 70,000 travellers as more than 600 flights were cancelled.

Although the situation is extraordinary, it has been on the cards for some time, one analyst said.

“It is remarkable, in a situation where there is a lack of pilots across Europe, that SAS has not seen loss of staff to other companies, if pilots are so dissatisfied with the package they currently have with SAS,” Jacob Pedersen, a stock market analyst with Sydbank who specializes in the aviation industry, told Danish news agency Ritzau.

“Having said that, these pilots have had to put up with an incredible amount over the last 20 years in the form of various types of cutbacks,” Pedersen added.

Over 1,400 pilots in Denmark, Norway and Sweden began striking on Friday after failing to reach a collective bargaining agreement with the company.

After negotiations broke down, members of the SAS Pilot group walked out on April 26th in all three countries. The group represents almost all (95 percent) of the airline's pilots in Scandinavia.

Salary increases are a major sticking point but the union has said that the biggest issues relate to working hours and scheduling.

The SAS Pilot group said that their salary requests are in line with the market rate, while one SAS negotiator called their requests “unreasonable and extreme”.

READ ALSO: Here's what you need to know about the SAS strike

Pedersen noted that SAS cabin crew and pilots are primarily employed under Scandinavian-style contracts agreed with unions (overenskomst in Danish and kollektivavtal in Swedish), making staff a larger overhead for SAS relative to other airlines.

The strike could have serious – and costly – consequences for SAS if the company is to meet the demands of the striking pilots, according to the industry analyst.

SAS was under considerable economic strain throughout the 2000s, but recovered after a policy of cuts was introduced in 2012.

The company has turned a profit in each of the last four years.

“SAS looks like delivering a profit again this year, but this is all propped up by the cuts the company is making,” Pedersen said.

“And if that trend comes to an end, whereby SAS can save money every year, it won’t take many quarters before SAS is once again in the red and fighting for its future,” he added.

SAS posted a net loss of 469 million Swedish kronor in the first quarter of 2019, compared to 249 million a year earlier, but forecast a full-year profit.

Sydbank on Friday predicted the strike would cost SAS 60 to 80 million kronor per day, AFP reports.