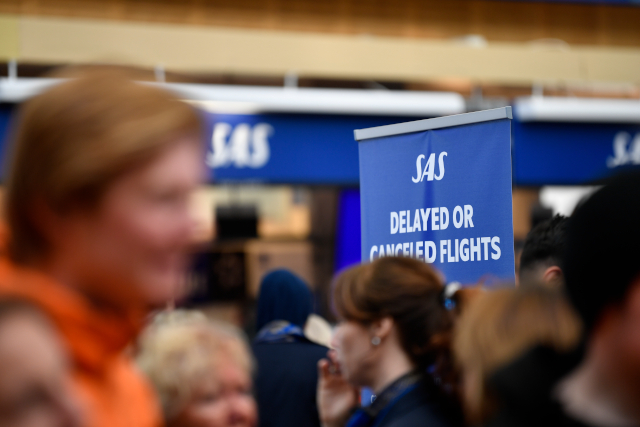 The strike is likely to affect weekend flights as well. Photo: Henrik Montgomery/TT

READ ALSO: What to do if you're affected by the SAS strike

SAS said it had cancelled 673 domestic, European and long-haul flights on Friday, affecting more than 72,000 passengers, after negotiations broke down with pilots' unions. Flights operated by SAS partners and ambulance flights are not affected, but that still leaves 70 percent of the company's other flights.

SAS has offered passengers travelling on Friday, Saturday, Sunday or Monday the chance to re-book their flights for free.

The strike comes after unsuccessful negotiations on a collective bargaining agreement between the pilot group and the airline. Salary increases are the biggest sticking point but other issues relate to working hours and scheduling.

The SAS Pilot group has said that their salary requests are in line with the market rate, while SAS negotiators have called their requests “unreasonable and extreme”.

“It is deeply regretful that the pilots strike will have a negative impact on our customers. SAS is prepared to continue to negotiate, but if the requirements were to be met, they would have very negative consequences for the company,” added Karin Nyman, director of communications at SAS, in a statement on Friday.

But pilots insisted their demands were reasonable.

“They're demonizing us and that makes the process more difficult. Almost one in four SAS flights is flown by subcontractors and we want to know what our future looks like,” Wilhelm Tersmeden, chairman of the Swedish pilot association's SAS branch, told Swedish news agency TT on Friday morning.

He agreed with the employer that the outcome was unfortunate. Both parties had been locked in negotiations with the help of mediators for days, saying that they wanted to avoid industrial action.

“It feels like a failure for everyone involved. We have failed the passengers,” said Tersmeden. “It's about our jobs and our future.”

Keep an eye on www.thelocal.se for more updates throughout the day. Are you affected by the strike? Email [email protected]