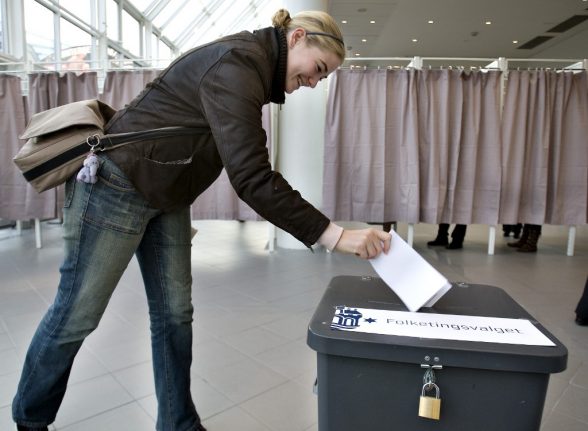 The two illustrate how voter turnout in European elections varies widely, with northern nations at the top and eastern countries at the bottom. It is also often a reflection of citizens' satisfaction with the bloc's institutions.

Denmark and Slovakia will each elect 13 representatives to the European Parliament between May 23 and 26.

Around 76 percent of Denmark's 4.2 million eligible voters say they plan to vote, compared to just 27 percent of Slovakia's 4.8 million. In the last EU elections in 2014, only 13 percent of Slovaks voted — the weakest turnout in Europe. Far from Denmark's bustling capital of Copenhagen, in the small central town of Nyborg, 21-year-old Josepha Pultz Nielsen (pictured right) plans to cast her ballot even though the European Union remains an abstract construction for her.

“I don't think there is a lot of focus on the EU. In school, we don't learn much about it,” says the shy young woman who works as an after-school care teacher.

While she sees freedom of movement as a clear benefit of European Union membership, she is primarily attracted to the idea of an open and welcoming bloc that can work together to address major issues.

“We have to change the world and help each other with global warming,” she says.

More than 350 million Europeans will vote to elect 751 members to the European Parliament in May.

Danes are much more interested in the European elections than people in the rest of the EU, notes Catharina Sorensen, head of research at the think tank Europa.

In the Scandinavian country, the general thinking is that “you simply have to go and vote if you support democracy in your country,” she says.

“In other countries there is less of a sense that it is a democratic duty to go and vote.”

Pultz Nielsen agreed. “It's better to go and vote with a blank vote than not vote.”

Meanwhile only 25 percent of Slovaks vote regularly, according to Eurobarometer.

Danes also tend to have confidence in institutions, be they national or European, with 60 percent saying they have faith in the EU.

This compares to only 43 percent of Slovaks, according to Eurostat.

“I do not like this institution,” 42-year-old Slovak Juraj Martiny says of the European parliament, sitting at a cafe in Bratislava.

The director of a public relations firm, he won't be going to the polls in the May elections, though he did vote five years ago.

He says the European Parliament is a pseudo-democracy.

“Decisions are being made by the European Commission, which -? as opposed to the members of the European Parliament ?- has not been directly elected.”

He also feels the parliament is too far removed from the daily lives of Europeans in general, and Slovaks in particular.

It can't even “approve unambiguous legislation that would ensure that a jar of Nutella bought in Paris would be the same as one bought in Budapest or Bratislava,” he says, referring to tests conducted in 2017 revealing that big Western brands use cheaper ingredients in food products sold in former communist countries.

More than half of Slovaks, 54 percent, said last year they would abstain from the May elections because “their vote does not make a difference”, according to Eurobarometer.

Contrary to Denmark, voters in other EU countries have “much more utilitarian concerns, (such as) 'does the EU provide enough benefit to us',” says Sorensen.

A recent poll showed that 63 percent of Slovaks saw no advantages to being a member of the EU.

Meanwhile Denmark, which joined the bloc at the same time as Britain in 1973, is a largely europhile country — as long as it can have its Europe a la carte. The Scandinavian country has zealously guarded its sovereignty, negotiating four key opt-outs to EU cooperation: on security and defence, citizenship, police and justice, and the adoption of the euro.

In 2014, 56 percent of Danes voted in the EU elections, official statistics show.

This year, the number is likely to be higher.

Danish Prime Minister Lars Lokke Rasmussen must call a general election before mid-June, and many political observers suspect he will hold it at the same time as the European elections, to avoid voter fatigue.

Holding the two votes at the same time will “most likely boost turnout,” researcher Sorensen added, but would also likely make Europe “quite absent from the campaign”.