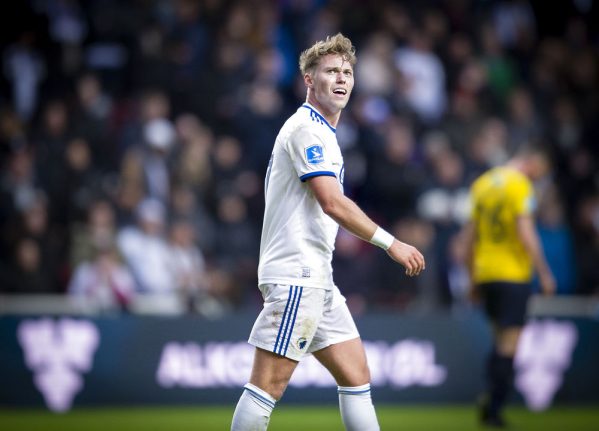 On Sunday, Fischer was the target of homophobic chanting from fans of Odense Boldklub after FC Copenhagen’s 1-0 victory at the home of their Superligaen rivals.

The following day, the midfielder, who has played 21 times for Denmark’s national team, was again targeted — this time at a match in which he didn’t play, as fans of Brøndby chanted about the player following a match against FC Nordsjælland.

Fischer condemned the chanting following the match in Odense.

“I experienced specific songs against me, directed at me by name, saying I was homosexual. That’s not the problem. I have nothing against being called one thing or another. The problem for me here is that the word ‘homo’ was used as an insult. That is a very, very bad culture for young people and generally for everyone who comes to a football stadium to see football,” he told TV2.

“There’s something of a culture in elite sport, in football, which is based on just being tough, keeping quiet, because that makes you a strong sportsman. But it’s not about being a strong sportsman. It’s about the culture at stadia needing to be better. It’s about ‘homosexual’ not being an insult. It never should have been (an insult), and especially in 2019 in Denmark, it should not be anymore,” the 24-year-old footballer added.

The player has received the backing of the Danish Football Association (DBU), which, in a joint statement with league and fans’ representative organisations, said that “homophobia has no place – either on or off the pitch”.

DBU made specific reference to the chants about Fischer in its statement condemning homophobia at Danish football stadia.

“It is crucial that players who are subjected to harassment of any kind react and call it out. Viktor Fischer did this, and that deserves respect,” the statement read.

The football association has since confirmed disciplinary action will be considered in response to the incidents at both matches.

FC Copenhagen, Odense, and Brøndby have all condemned the discriminatory behaviour by fans, as have those teams’ fan clubs.

Peter Holk Svendsen, head of LGBT Danmark, a national association for LGBTI people, called the incidents “highly criticisable” but noted that clubs and fanclubs, as well as players, had all spoken out against the chanting.

“On the part of both Viktor Fischer and from Denmark’s football authorities, there is dialogue about the fact this is a problem. That’s the positive side of this matter,” Svendsen told Ritzau.

But Danish football can do more to fight homophobia, he added, noting that no professional players in Denmark have publicly come out as gay.

“It’s a challenge that this is not a culture in which it’s possible (to come out), and there’s not enough acceptance for all segments of Danish society,” he said.

A DBU survey in 2018 found that, amongst 871 players, coaches, parents and officials involved in youth football matches, 15 percent said they have experienced homophobic shouting.