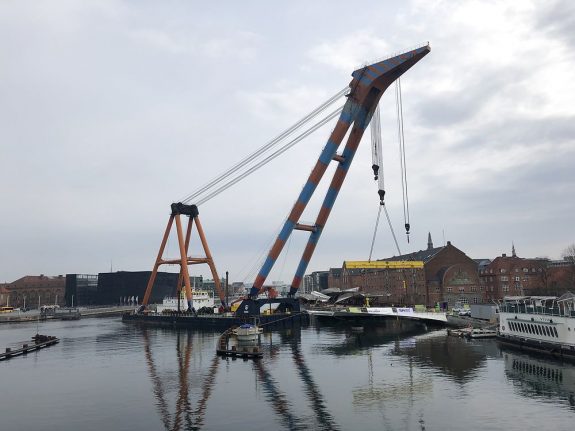 The bridge will complement the main Langebro bridge from 1954, one of the city’s most famous harbour crossings and immortalised by singer Kim Larsen.

Little Langebro will be place north of its larger sister bridge, connecting Vester Voldgade with Langebrogade on each side of the harbour.

The main section of the new bridge was delivered on Wednesday on a barge from Dutch city Rotterdam, TV2 reports.

“The (new) bridge will give a better alternative to the many cyclists in Copenhagen who cycle across Langebro every day,” Peter Fangel Poulsen, project manager with Realdania By & Byg, the company behind the bridge, told TV2.

“We expect it to be well-used,” Poulsen added.

Another dedicated bridge for cyclists and pedestrians, Inderhavnsbroen, connecting Christianshavn with the popular Nyhavn area at the northern end of the harbour, was opened in 2016.

In 2014, the Cykelslangen (Bicycle Snake), a winding 230-metre bicycle bridge connecting Islands Brygge with Vesterbro via the existing Byggebro bridge, opened to the south of Langebro.

The new cycle bridge is expected to be completed this autumn. It consists of four parts, each weighing 600 tonnes, according to TV2’s report.

It will allow harbour traffic to pass by turning outwards in the middle to allow taller boats to sail through, a complex design which has added to the challenge of its construction.

Originally scheduled to be opened in 2018, the project was delayed after a crane collapsed, damaging parts of the bridge.

Realdania, a private association which supports architecture and planning, is building the bridge as a gift to the city, TV2 writes.