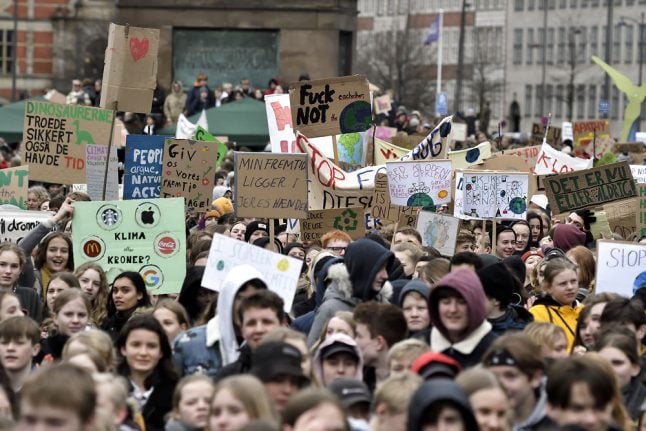 Young people went on strike from lessons to gather in 32 towns and cities across the country, including in front of the national parliament at Christiansborg Palace in Copenhagen.

Several thousand school children and students stayed away from classes in order to make clear to politicians how highly they prioritise the issue of climate change.

The Danish demonstration is part of the global school strike movement for climate dubbed Fridays for Future. The movement was started by Swedish teenager Greta Thunberg, who this week received a Nobel Peace Prize nomination.

Upper secondary school student Adrian Preisler, who is 18, was one of the organisers of the Christiansborg demonstration. Preisler told Politiken he was taking part because “this is my my future and everyone else’s future, and not something we can just play around with.”.

“And I think that there are some politicians here at Christiansborg just in front of us who simply don’t do enough on climate,” he added.

Politicians from the environmentalist Alternative party tweeted about the demonstration, including leader Uffe Elbæk, who wrote that he was present with “three generations”.

“I am so proud of him. They have prepared. They are sticking together. He is 12 years old and means this seriously,” Carsten Nielsen tweeted.

Prime Minister Lars Løkke Rasmussen also made an appearance at the demonstration and spoke to some of the striking school students.

“It is incredibly good to see our young people getting involved,” the PM said in an interview with TV2 News.

Rasmussen denied his government was failing to do enough on climate change.

“I think we are (acting). We are well on the way. We are on the way to being involved, but the international climate battle cannot be won in Denmark,” he said.