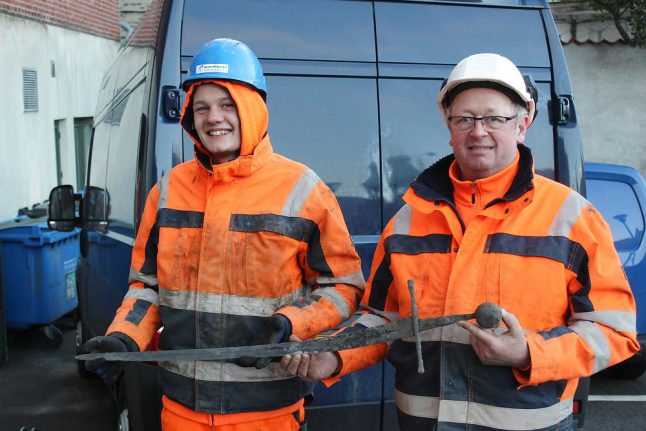 After making the remarkable find, Jannic Vestergaard and Henning Nøhr called the Historical Museum of Northern Jutland, which later confirmed the discovery via its website.

Kenneth Nielsen, an archaeologist from the museum, examined the 1.1 metre-long sword and quickly concluded it was of 14th-century Medieval origin.

The sword was found in ground on top of the oldest layer of paving on Algade, one of the northern city’s central streets.

“Discoveries from here generally point in the direction of the 1300s, so the sword must have ended in the ground in that century,” Nielsen said in the press statement.

The sword is described as having an “extremely high level of workmanship” with detail that only highly-skilled armaments makers could have produced.

That includes a fuller, or a rounded longitudinal groove, a feature designed to reduce the weight of the more than metre-long weapon, which weighs just over 1 kilogram. Swords were expensive items in the Middle Ages, and were only owned by wealthy segments of society such as the nobility.

As such, Nielsen said he was surprised by the location of the discovery in what would have been a normal town street, given the tradition for warriors to be buried with their weapons. Most swords of this kind are found at burial mounds.

The unusual placement of the discovery may be related to its being lost under violent disturbances, according to Nielsen, given that the 1300s were a period of instability in Danish history with a series of internal power struggles.

“The best explanation we can come up with is that the owner of the sword was defeated in a battle. In the tumult, it was then trod down into the layer of mud that formed the street back then,” the archaeologist said.

The sword will now be treated for conservational purposes with a view to being placed on display at the Historical Museum of Northern Jutland – which is in fact located in Aalborg’s Algade, the very street where the battle item was lost centuries ago.