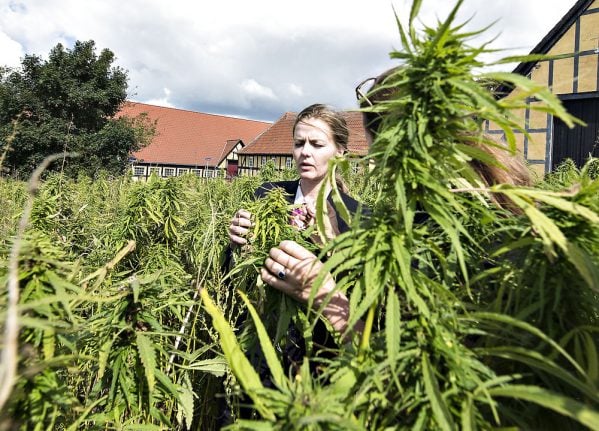 Minister for Health Ellen Trane Nørby visits a producer of the cannabis sativa plant for medicinal use in August 2017. Photo: Henning Bagger/Ritzau Scanpix

Prior to the end of 2017, parliament passed a law enabling selected patient groups to be prescribed cannabis oil by their general practitioners as part of a four-year trial.

But doctors were reported to be reluctant about prescribing the medicine, citing a lack of studies determining its effectiveness and side effects.

Around 500 patients were initially expected to make use of the trial, DR reports.

But one year in, 1,400 people have already been given a prescription for the alternative treatment, the broadcaster writes, based on figures recorded by the Ministry of Health.

“This shows that the trial scheme is off to a good start. The numbers are a lot higher than expected, so we’ve had a good first year with the trial scheme, so we will also gain new knowledge for patients’ benefit,” health minister Ellen Trane Nørby told DR.

The minister said that the figures demonstrated that doctors with everyday patient contact were willing to try the alternative treatment, despite criticism from medical professionals’ organisations.

The Danish College of General Practitioners, which was sceptical of the scheme at its outset, has not changed its position, according to the organisation’s director Anders Beich, a GP.

Beich told DR that the option of prescribing medicinal cannabis should not be available to all doctors, as some do not have the requisite knowledge of the treatment to recommend it to patients.

“I think it is an incorrect measure of success to just look at how many people are receiving the treatment. The most important thing is to be treated by someone who has the competencies, experience and framework to treat using the best possible medical resources at any given time. We do not subscribe to the ‘more, the better’ premise,” he said.

“If the will had been there, fewer doctors could have been involved, but doctors with some knowledge of this,” he added.

The trial is taking place alongside research projects aimed at finding out which patients benefit from the treatment, Nørby said.

She added that, with three years remaining on the scheme, it was too early to make conclusions.